The NWE spot lpg coaster market continued on last week’s quiet note with few enquiries and fixtures taking place but towards the endof the week the market picked up its pace and seemed a bit more balanced with more ships fixed away on owners programs. As far as vessel availabilities are concerned there were reportedly a few open prompt vessels especially on the smaller sizes but there were also some larger sized vessels seen and more are expected in the coming weeks. Moreover as owners have been quite competitive lately in trying to secure tons freight rates are currently under pressure. In butane news now, the majority of exports reported remain ex SCUK and ARA towards various destinations. Also demand has declined with blenders non-existent and petchem needs are easily covered. In propane news, activity remains balanced as weak demand continues and so does scarce supply in the region.

Moving on to the MED, the spot market has seen less activity this past week but there were some enquiries and fixtures taking place in the region. Furthermore the larger sized vessels have seen more gaps in their schedules and facing the most idle time. In the Black Sea region now activity continues to be on the quiet side with smaller stems reportedly being absorbed. On the propane coaster market side, demand has been quiet as per usual with no transactions worth mentioning. On the butane coaster market side now the market has gotten quieter as demand from Morocco has reportedly been covered for the most part. However Egypt has shown some more demand this week in comparison.

The Feast pressurized spot lpg market was reportedly quieter this week as there were holidays in China and quite a few players attending the lpg conference in Houston, Texas. Furthermore the usual spot import activity into the Philippines was reportedly quiet. Also the occasional spot enquiries seen for delivery Malaysia and Bangladesh were present but nothing concluded as of yet. In China, the domestic market continues to be quite quiet with very little seen in terms of demand as there were no spot requirements.

The Asian petchem market saw the ppl market reportedly subdued this week. The ppl market’s prices are under pressure as more supplies are expected for April thus buying has become less urgent. In the C4 market now, there was more activity reported here in comparison to the ppl market with btd and crude c4 stems offered in the throughout this past week. 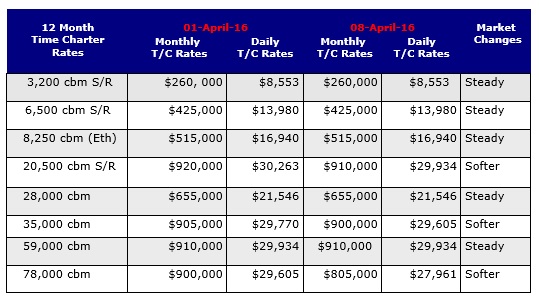 Disclaimer: This market report is prepared in good faith, however a significant part of it is based on estimates and market rumors and therefore nothing stated in the report should be taken as a confirmed fact.

StealthGas Inc. denies the responsibility for any errors and/or omissions of whatsoever nature found in the market reports posted on this website.