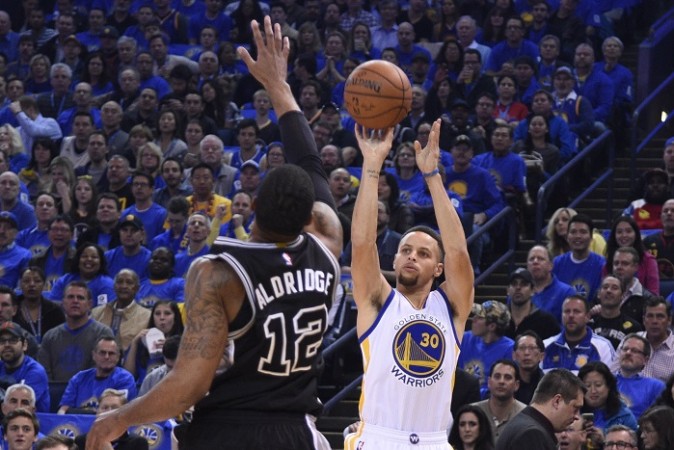 Can Spurs stop Stephen Curry from beyond the arc?Reuters

Things cannot get any better in the NBA as Golden State Warriors are set to face San Antonio Spurs in a mouthwatering clash at the AT & T Center, Saturday. With some brilliant individual stars in both teams, this NBA game is expected to entertain viewers to the hilt. Spurs have a 58-10 win-loss record this season compared to Warriors' 62-6.

The Warriors were the first team to qualify for the playoffs, and are top favourites to win the NBA title. They have been able to dominate the NBA this season, with some brilliant performances from Stephen Curry and Klay Thompson. Both the players have been phenomenal offensively.

The duo has been consistent throughout the season, and even when they fail to live up to their standards, Draymond Green has shown his class to challenge Warriors' opponents.

All in all, it has been a standout performance from their top players, which has helped them achieve top position in the Western Conference. Curry, Thompson and Green will once again be keen to deliver and further strengthen their favourites tag for the NBA title.

Make no mistake, the Warriors are the team to beat in the NBA this season. However it is not going to be a cakewalk for Warriors to defeat Spurs, who have not lost a single game at home. They have won 34 games on the trot at home.

The Spurs have had an incredible season so far as well, and what makes them such an difficult team to beat is their players have been playing together for some time now. Players like Tim Duncan, Tony Parker and Mark Ginobli still have it in them to challenge any team in the NBA.

Besides these champion hoopsters, Spurs also have some other stars like LaMarcus Alridge and Kawhi Leonard as well. Duncan, who missed Spurs' last game against the Warriors, believes  Alridge and Leonard have grown in confidence this season.

"[Aldridge] and Kawhi both, I think they were trying to fit in, trying to see where things are, and they've gotten to the point where they're taking over," ESPN quoted Duncan as saying. "They understand that we're going to ride them, and that builds their confidence."

Duncan is eager to play the game as they are the best two teams in the NBA, and a victory for Spurs will help them gather huge confidence for the playoffs.

"It'll be a great matchup for us, two of the best records in the league, and they're playing exceptionally well. So it's a good test for us; a playoff type of atmosphere, playoff type of intensity, a good experience for us. But I'll leave it at that," Duncan said.

Spurs will be eying revenge for their January loss, while Warriors will be keen to become the first team this season to beat Duncan and co. at home.

US viewers can watch the San Antonio Spurs vs Golden State Warriors live NBA game in the US on ABC.

Viewers around the world can watch all the NBA live action by live streaming on NBA Online.