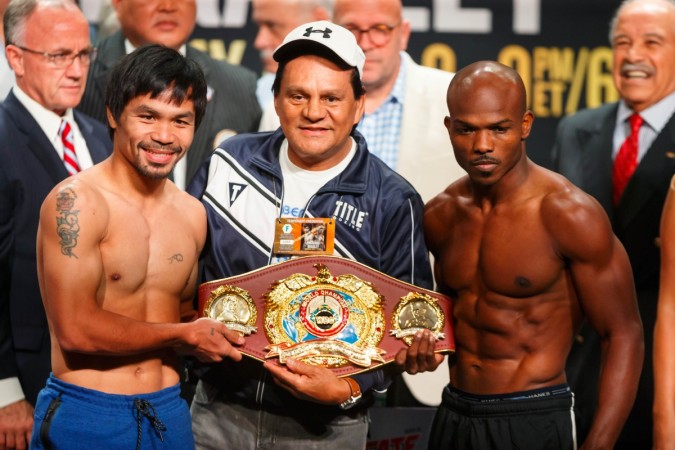 After this match, we will get to know if Filipino boxing legend Manny Pacquiao is indeed retiring as a pro. The veteran pugilist goes against long-term rival Timothy Bradley for the third and the final time Saturday at the MGM Grand Arena in Las Vegas.

The two boxers will be engaged in 12 rounds of welterweight fight to win bragging rights over the other. Bradley, 32, won the first of his two fights against Pacquiao via a judges' split decision in 2012 to take the WBO Welterweight title home. After the demands of a rematch reached zenith, Pac-Man, 37, returned two years later to record a unanimous decision win and get the title back.

The grudge match April 9 will settle everything now. We will get to find whether Pacquiao, who has held the world title in record eight divisions, calls time on his decorated career or whether Bradley establishes himself as really a better fighter, as he is regarded at the moment.

Both boxers weighed in at 145.5 pounds in the official pre-fight weigh-in.

"I hope the fans really enjoy themselves on Saturday night," Pacquiao told ESPN after the weigh-in. "Expect more action in the ring. We did our best in training camp, and I will bring out my best on Saturday night."

Boxing fans could expect a slower Pacquiao as compared to what he was during his prime. No doubt age has caught up with him but the boxer from Philippines did try to give his best during his last fight against Floyd Mayweather Jr at the same venue. Pac-Man took the fight to the champion but the American defended the jabs and hooks with elan, thus earning a unanimous win.

Pacquiao underwent a rotator cuff surgery following the fight and recently also got embroiled in a controversy after comparing homosexuals to animals.

The footage, building up to the big fight, is definitely with Pacquiao, but Bradley, a former light welterweight champion as well, wants to play his role in turning all the attention to himself during the fight.

"I didn't imagine this [getting another rematch against Pacquiao], but I feel this is what God had in store for me," Bradley said. "I can beat Manny Pacquiao, and this is another opportunity. You all better get ready. There will be a lot of disappointed Pacquiao fans [Saturday] night."

Viewers in the US can watch the fight on HBO. Online streaming can be found on HBO and TopRank.tv (subscription needed). Viewers in Canada can catch the event online on Sports Net.

Viewers in the UK can watch the event on Premier Sports, while the radio commentary will be available on TalkSport 2. It can also be watched online at Premier Sports.

The event will not be broadcast in India, but online users could watch the fight in the HBO YouTube handle (if video is available).