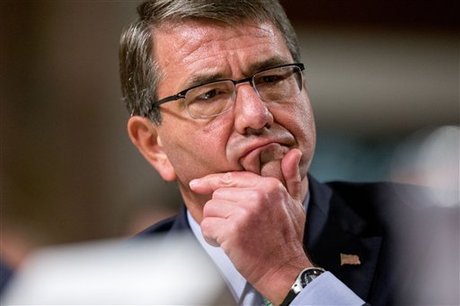 Carter was speaking on a trip to India before heading to the United Arab Emirates and Saudi Arabia Saturday, where he will attend a Gulf Cooperation Council ministerial meeting ahead of a GCC summit that will include President Barack Obama.

"Economically, it's important that the destruction that has occurred be repaired and we are looking to help the Iraqis with that," the defense secretary told reporters on the deck of the USS Blue Ridge in Mormugao harbor.

"I know that Secretary Kerry was discussing our efforts with the PM, but that's a global effort in which many countries can make a contribution," said Carter.

"I believe that will be one of the things that the president will want to raise with the Gulf partners when he meets with them at the end of next week: their ability to participate in that economic issue."

He said others included "the issues having to do with oil and the price of oil, that makes it harder for the Iraqi government."

Plummeting global oil prices have hit Iraq hard, and Baghdad said in February oil revenues have sunk to just 15 percent of their value two years ago.

The country faces a huge budget crunch, with the massive cost of running the war against the Islamic State jihadist group and sustained public pressure to deliver better services.

Carter was in India and the Philippines this week for talks on increasing regional defense cooperation, as tensions mount over China's expansionist ambitions in the disputed South China Sea.