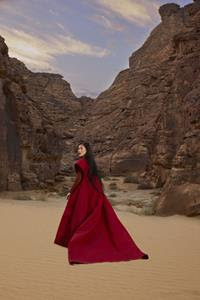 Commissioned by the Royal Commission for AlUla (RCU) and created by Chinese musician, vocalist and artistic director Rui Fu, Nine Songs brings together a world-class ensemble of performers from across the globe. Working with artistic co-director Farooq Chaudhry and musical director Jocelyn Pook, Fu’s new work is inspired by the Chu Ci (Songs of Chu), an ancient anthology of romantic Chinese poetry from the 1st century BC, while responding to the dramatic topography, undulating vistas, remarkable geological structures of AlUla.

Nine Songs draws from the Jiu Ge collection, one of the seventeen sections of the Songs of Chu, whose poems act as prayers to clouds, mountains and rivers. The ritualistic performance is set against the backdrop of AlUla’s stunning sandstone cliffs and canyons, re-imagining the sublime, delicate and ancestral bond between art, landscape and humankind while connecting music and movement with the surrounding terrain. 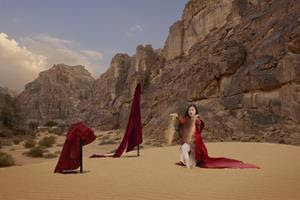 Rui Fu specialises in the improvisational and impressionistic interpretation of Chinese ethnic musical traditions. Strongly influenced by the temporal, timbral and rhythmic flexibilities of such traditions, she collaborates with musicians from minority tribes in China to explore indigenous practices and rare instruments and is known for singing in her own invented, non-lexical language that cuts across cultural barriers.

Nine Songs sees Fu’s vocal performance accompanied by new compositions played on violin, harp, Chinese dulcimer, double bass, guqin and taiko drums, with costumes and scenery designed by Marie Cantenys and Margaux Lalanne. Nine Songs also features lighting and set design by ARP Theatre’s Fabiana Piccioli and Sander Loonen. Taking place on a circular stage in the desert at sunset, the performance seeks commonality with rituals and practices from different cultures, with nature acting as the unifying force between them. Following its world premiere in AlUla, Nine Songs will go on to be seen at the most prestigious arts festivals across the globe in some of its greatest cities, including London, New York, Edinburgh, Shanghai, Berlin and Athens. 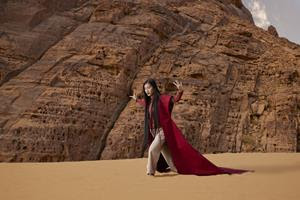 Wadi AlFann, meaning ‘Valley of the Arts’, offers a profound opportunity to experience art in dialogue with nature. This unique site will see era-defining, large-scale, site-specific works by some of the world’s most compelling artists permanently placed in the monumental landscape. The first five works, by Manal AlDowayan, Agnes Denes, Michael Heizer, Ahmed Mater and James Turrell, will be completed in 2024, marking the start of an ongoing programme of commissions.

Co-produced by the Royal Commission for AlUla and Skye Blue Productions, the performance of Nine Songs marks the start of Wadi AlFann’s pre-opening programme, which will also include temporary exhibitions, artist residencies and public symposia. The unveiling of the first five artworks in 2024 will also be accompanied by a public programme offering educational opportunities, skills-based engagement, sessions with art professionals, masterclasses for local creatives and more.

AlUla is a majestic region of natural and creative heritage steeped in a legacy of cross-cultural exchange. Home to the ancient Nabataean city of Hegra, Saudi Arabia’s first UNESCO World Heritage Site, the region has been at the crossroads of cultural exchange for millennia, historically lying on the incense trade route and once capital to the ancient Kingdom of Dadan. Today, it is a living museum of heritage, arts and nature, rekindling its legacy as a vital cultural destination.

“I am often fascinated by the story of our ancestors who, upon seeing the vast earth and the sky, voiced their first call. Returning to that state of wonder and bewilderment has long been my point of departure. I have strived to construct a musical space in which I can, through the voice, reconnect with the rituals of reverence and the primal sensibilities that allow us to carry essential memories forward in time. The ancient land of AlUla is therefore a very fitting place to present Nine Songs for the first time.

“My childhood experiences in China, the UK and the U.S. and my travels through over 30 countries led me to shift to a spontaneously invented language in my lyrics, in order to adapt to instrumentation from different localities. These scattered memories are now the backbone of our interpretation of the 2,600-year-old Nine Songs, illustrating the layers of our being as we progress from birth to death.”

Nora Aldabal, executive director of arts and creative industries at the Royal Commission for AlUla, says:

“Nine Songs is an homage to age-old artistic tradition, which is why the ancient land of AlUla is a powerful place for its premiere. The Royal Commission for AlUla commissioned this work for the spectacular location of Wadi AlFann as a tribute to the profound link between art and nature that can be found in this unique valley. Touching on themes of ancestry, civilisation and humanity, Rui Fu’s work resonates deeply with people from across the world, regardless of culture, language or background. Nine Songs is a spectacular way to launch Wadi AlFann’s programme of public activities, through which local communities and visitors can experience arts and culture as a source of education and enrichment.”

Photos accompanying this announcement are available at:

A video accompanying this announcement is available at:

Lithium Werks, B.V., announces the formation of a new Specialty High-Performance business unit that will collaborate with leading global sports car manufacturers for their electrification of their fleet and to supply them with the world’s fastest and most powerful lithium batteries