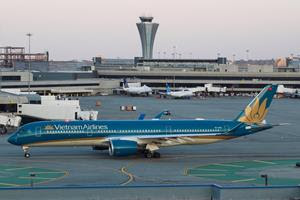 The inaugural flight, No.VN98, from Ho Chi Minh City to San Francisco, carried passengers on Boeing 787-9 Dreamliner, one of the most advanced-technology airplanes of the Vietnam Airlines fleet.

This historic flight signifies an important development of Vietnam’s aviation and Vietnam Airlines as the country’s first airline to conduct regular commercial direct flights to the U.S.

It recognizes the 20-year-effort of Vietnam Airlines since the establishment of its representative office in San Francisco to lay the foundation for direct route between the two countries.

“We are honored to be the first airport in the U.S. to offer nonstop regular flights to Vietnam. We are proud to offer a world-class experience with seamless access throughout the San Francisco Bay Area and grateful to Vietnam Airlines for making San Francisco their first U.S. destination,” said Director of San Francisco Airport Ivar C. Satero.

Initially, Vietnam Airlines will conduct 2 flights per week from Ho Chi Minh City to San Francisco by Boeing 787 and Airbus A350, the two most modern wide-body aircrafts.

The airline aims to increase to 7 flights per week after the Covid-19 pandemic is under control and plans to open a new route to connect Los Angeles to Hanoi and Ho Chi Minh City.

Vietnam Airlines – a member of SkyTeam Alliance – is the flag carrier of Vietnam and the major carrier in the South East Asia, operating 95 routes to 22 domestic and 29 international destinations with an average of 400 flights per day. Skytrax – the world’s leading airline and airport rating organization – has ranked Vietnam Airlines as a 4-Star Airline for four consecutive years.

Schneider Electric calls for a rethink of investment priorities to break the supply vs. demand deadlock and accelerate climate action at the WEF in Davos