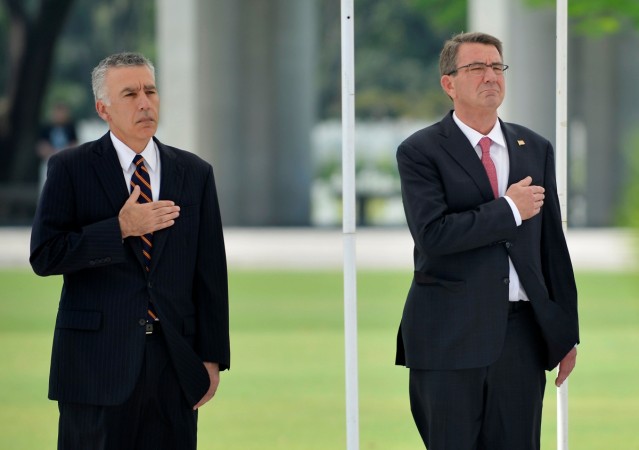 U.S. Defence Secretary Ash Carter (R) and U.S. ambassador to the Philippines Philip Goldberg stand at attention while the American anthem is played at the American cemetery in Taguig, metro Manila April 14, 2016. Carter announced the U.S. and the Philippines were conducting joint patrols in the South China Sea.Reuters

The United States and the Philippines have begun carrying out joint patrols in the South China Sea, U.S. Defence Secretary Ash Carter announced on Thursday during his visit to the Southeast Asian nation. He said the exercises would be held "regularly" in the future, sending a strong message to China, which is involved in territorial disputes with several countries in the region, including the Philippines.

The U.S. also fired projectiles near the South China Sea from its long-range missile system in the Philippines on Thursday, in a simulated assault exercise between U.S. and Philippine troops, AFP reported.

Carter said the United States would keep nearly 200 troops in Philippines till April-end and 75 U.S. troops — mostly Marines — "on a rotational basis" after the joint "Balikatan" U.S.-Philippines military exercises, according to Reuters.

"There will be a regular, periodic presence here of American forces," Carter said in Manila on Thursday. "The things that we're doing here are part of a pattern that goes back decades. They're by the invitation of an alliance partner."

This is the latest U.S.-Philippines joint patrol in the South China Sea this year, with the first one conducted last month and another one earlier in April. Increased U.S. presence in the region comes after the Philippines sought its help in ensuring China does not begin construction on the Scarborough Shoal, about 230 km west of the Philippines, which was controlled by Chinese coast guard ships in 2012.

"Countries across the Asia-Pacific are voicing concern with China's land reclamation, which stands out in size and scope, as well as its militarisation in the South China Sea," Carter said.

"They're voicing those concerns publicly and privately, at the highest levels, in regional meetings, and global fora," he added. The Philippines had hosted permanent U.S. military bases till 1992.

The U.S. also recently held a joint exercise with Japan in the South China Sea.

The South China Sea, which sees trade shipping worth $5 trillion every year, has become a point of political tension in recent years, with China constructing several artificial islands in the region and the United States conducting "freedom of navigation" patrols in the area, sparking anger in Beijing.