By Abigail Beall For Mailonline

But this is no starry night. The stunning images were taken by satellites before the paths and temperatures of the world's ocean currents were mapped onto them.

From the chaotic Atlantic to the mighty Pacific, the newly released pictures show the world’s ocean currents as you’ve never seen them before. 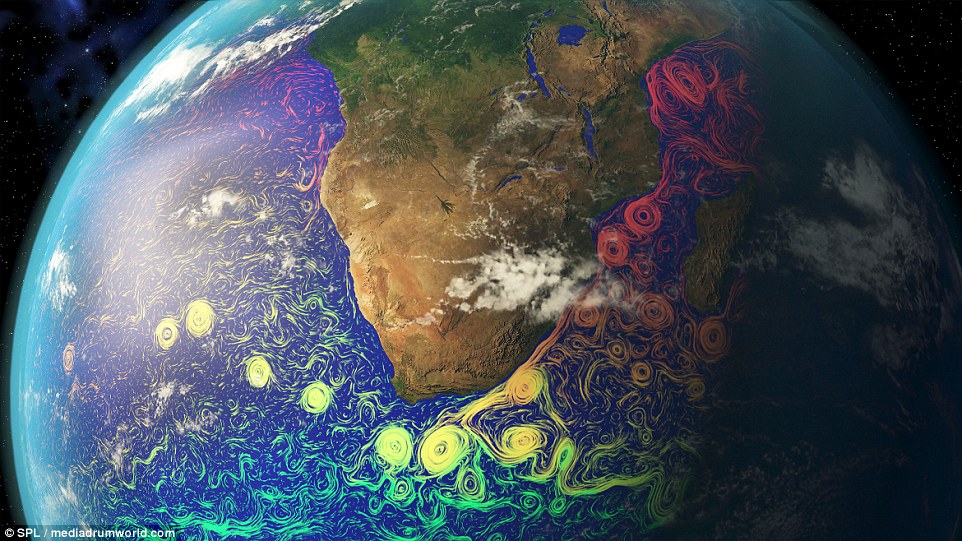 The Agulhas ocean currents, off southern Africa (pictured), are surface oceanic currents that forms the western boundary current of the southern Indian Ocean. It flows southward along the southeast coast of Mozambique and the coast of South Africa before turning eastward to Australia. Green colours in the pictures shows cooler temperatures while yellows and reds mean warmer currents

The technicolour swirls show the variety of temperatures, from cool greens in the poles to the red of the warm tropics near the equator.

The images were created by layering ocean current data compiled by Nasa with photographs taken by various satellites orbiting the planet.

Coastal currents near land are affected by local winds, but surface ocean currents, like those pictured in these images, occur on the open ocean and are driven by a complex global wind system.

Space agencies like Nasa and Esa monitor the ocean temperatures using satellites as part of their efforts to monitor changes to the climate and the world's ecosystems.

'Satellites offer a frequent overview of our entire planet – covered mostly by water – and provide valuable data to monitor and understand global ocean circulation,' a post on the Esa website says. 'Understanding water currents at the ocean surface is important for many applications.'

The way it works is simple - the ocean emits radiation in the infrared and the microwave wavelengths, and the amplitude of these wavelengths vary with the temperature of the ocean so can be used to measure it. 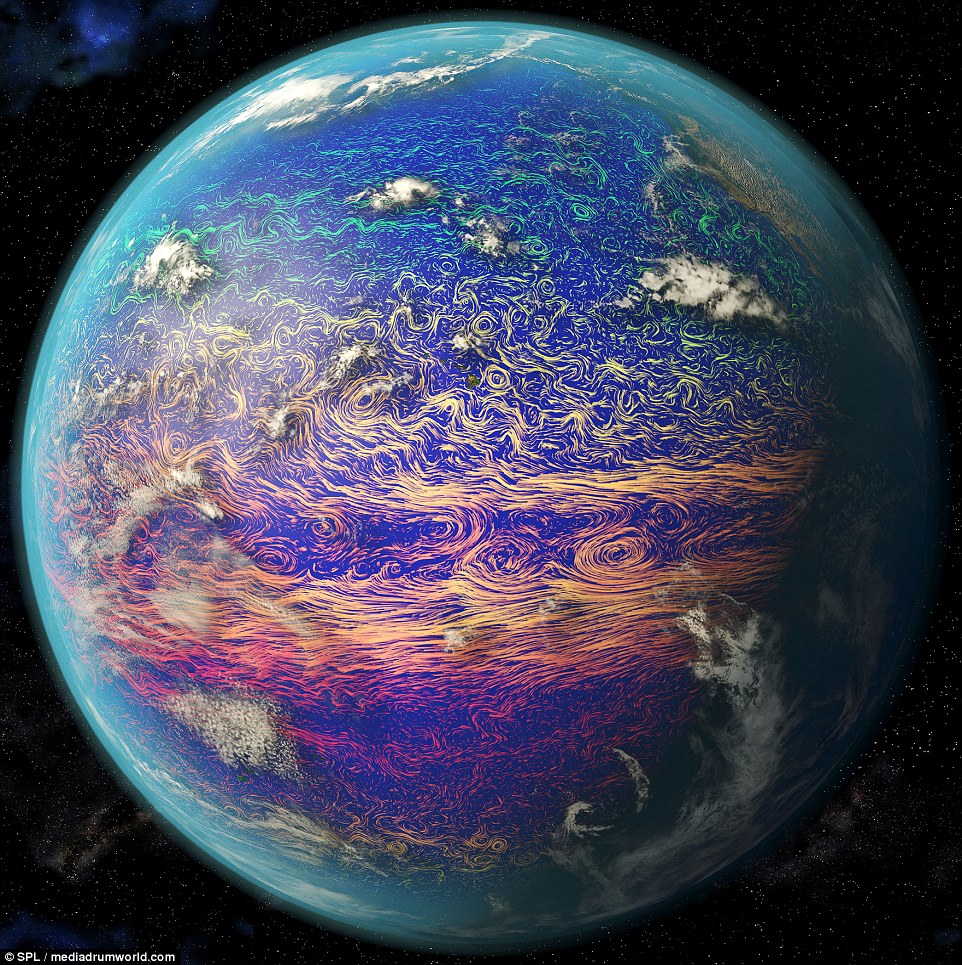 The images are the most stunning yet to be produced of the magnificent currents produced by the water our blue planet is lucky enough to possess.

Ocean surface currents have long fascinated oceanographers as they work to understand the role of oceans in the Earth system and how they affect our climate.

Measurements of ocean surface currents are fundamental to a number of practical applications, like marine search and rescue and emergency response, ship routing, anthropogenic and natural pollution and offshore renewable energy monitoring.

Ocean currents are complex and highly dynamic, and therefore need to be monitored constantly. 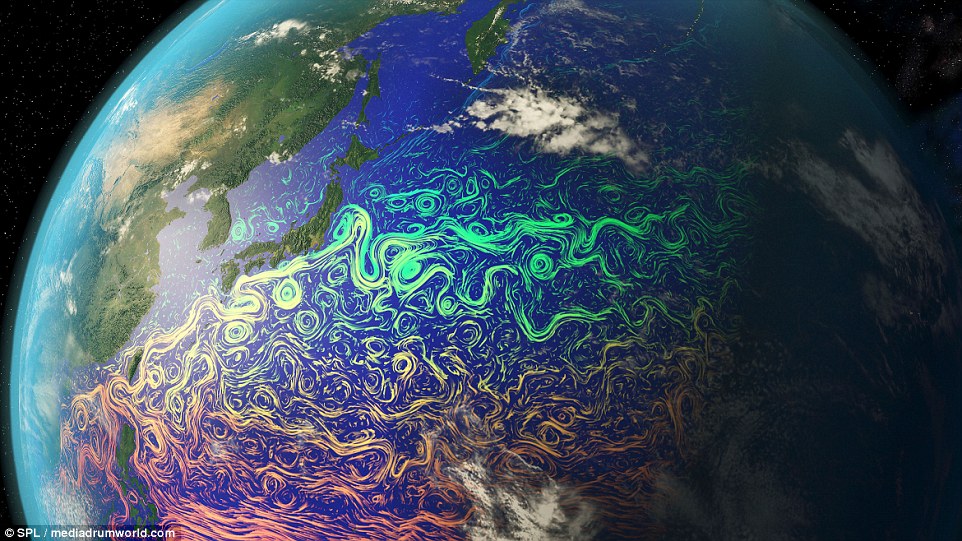 The Kuroshio Ocean current (pictured with the Pacific currents)  is a north-flowing ocean current on the west side of the North Pacific Ocean, similar to the Gulf Stream in the North Atlantic. Western currents like this are among the fastest surface currents in the ocean. One reason for the westward intensification of boundary currents has to do with the strengthening of the Coriolis effect with latitude 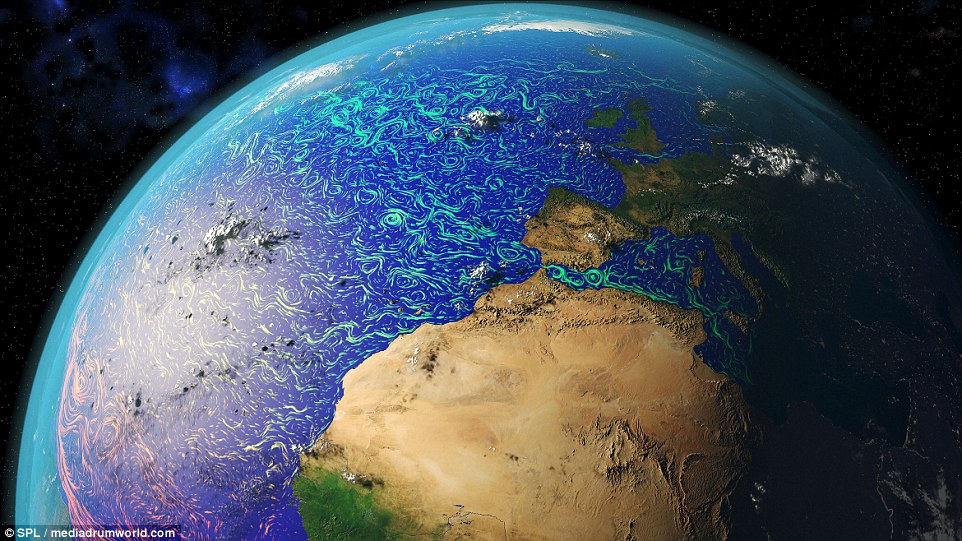 Ocean currents off Africa and Europe are pictured showing the influence of the Earth's rotation on the oceans. If the Earth did not rotate and remained stationary, the atmosphere would circulate between the high pressure poles and the low pressure equator in a simple way. Because the Earth rotates, the circulating air is deflected right in the Northern Hemisphere and left in the Southern Hemisphere

The Earth's rotation means we experience an apparent force known as the Coriolis force, or the Coriolis effect.

If the Earth did not rotate and remained stationary, the atmosphere would circulate between the high pressure poles and the low pressure equator in a simple way.

WHAT IS THE CORIOLIS EFFECT?

The Earth's rotation means we experience an apparent force known as the Coriolis force.

It was first described by 19th-century French physicist and mathematician Gustave-Gaspard de Coriolis in 1835.

He formulated theories of fluid dynamics through studying waterwheels, and realised the same theories could be applied to the motion of fluids on the surface of the Earth.

An example of the Coriolis effect can be seen when looking at a typical playground roundabout.

The Met Office said: 'If you are standing in the centre of a spinning roundabout (spinning anticlockwise) and attempt to throw a ball, it will appear to curve to the right, when in fact it is travelling in a straight line to anyone watching who is not on the roundabout.

'This is similar to what happens in the northern hemisphere of the Earth, where winds are deflected to the right.' 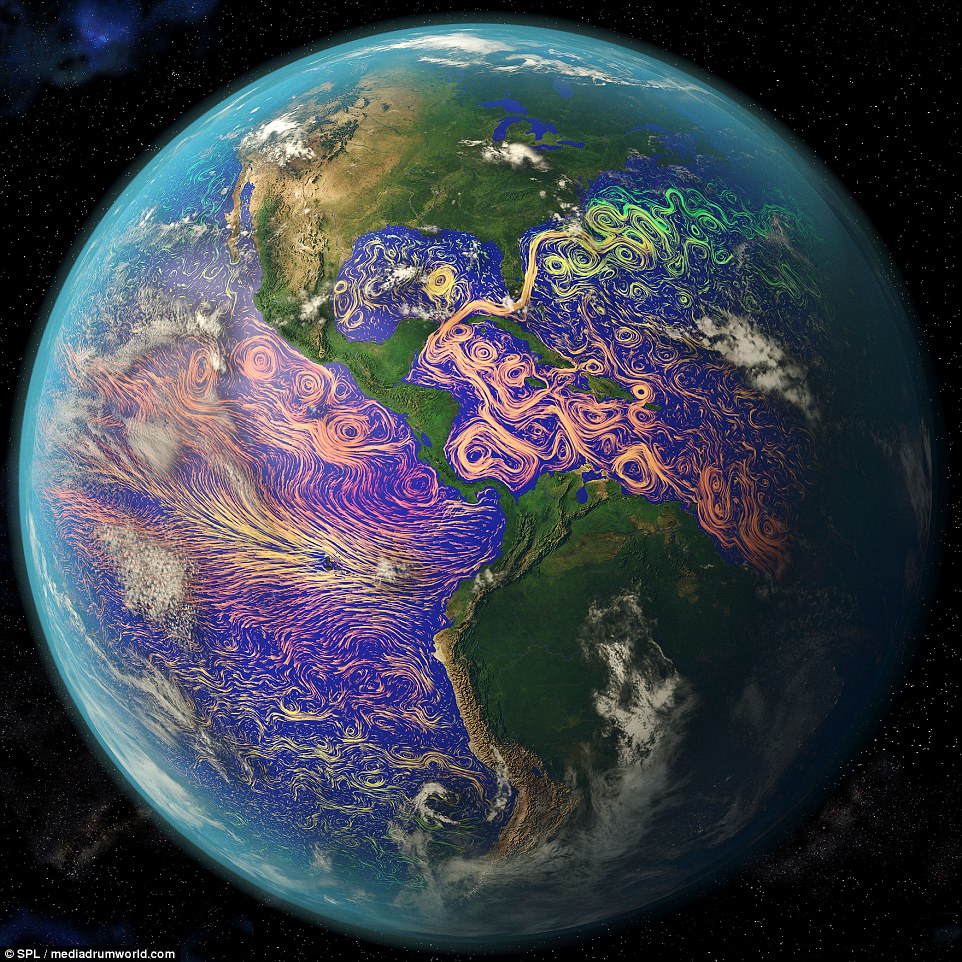 The Humboldt Current is a cold, low-salinity ocean current in the Pacific Ocean (pictured) that flows north along the west coast of South America from the southern tip of Chile to northern Peru. To the east, the Gulf stream, together with its northern extension towards Europe, the North Atlantic Drift, is a powerful, warm, and swift Atlantic ocean current that originates at the tip of Florida

This deflection is called the Coriolis effect.

It is named after the French mathematician Gaspard Gustave de Coriolis, who studied the transfer of energy in rotating systems.

He formulated theories of fluid dynamics through studying waterwheels, and realised the same theories could be applied to the motion of fluids on the surface of the Earth.

In the Northern Hemisphere, warm air around the equator rises and flows north toward the pole. As the air moves away from the equator, the Coriolis effect deflects it toward the right. It cools and descends, and descending air blows from the north east to the south west, back toward the equator.

A similar wind pattern occurs in the Southern Hemisphere. These winds blow from the south east toward the north west. 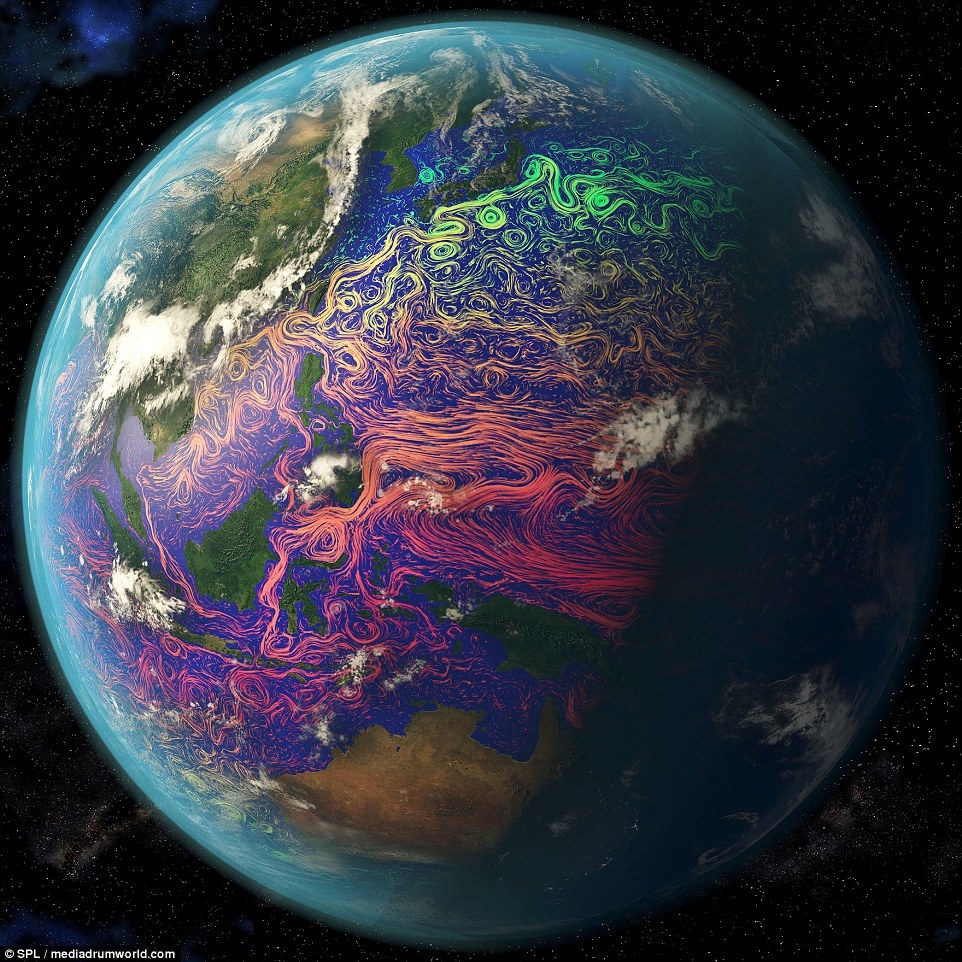 Ocean currents in the Coral Triangle, a marine area located in the western Pacific Ocean named for its abundance of coral. It includes the waters of Indonesia, Malaysia, the Philippines, Papua New Guinea, Timor Leste and Solomon Islands. Within this area of the seas live 76 per cent of the world’s coral species, 6 of the world’s 7 marine turtle species, and at least 2,228 reef fish species 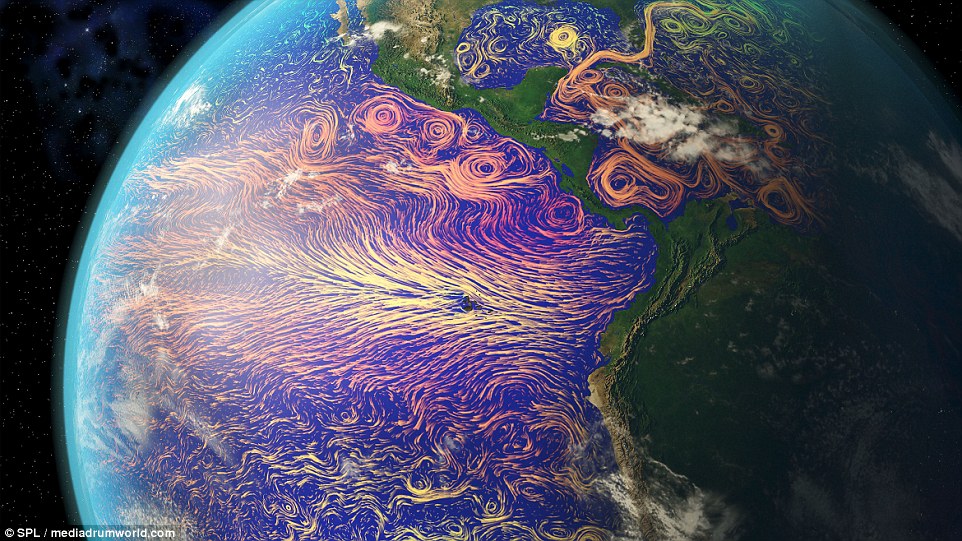 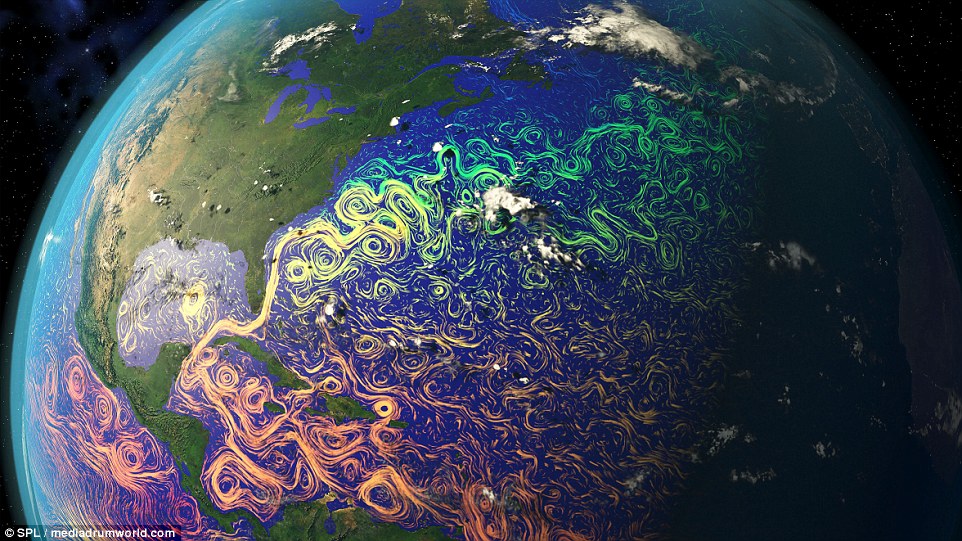 The Gulf Stream (pictured) influences the climate of the east coast of North America from Florida to Newfoundland, and the west coast of Europe