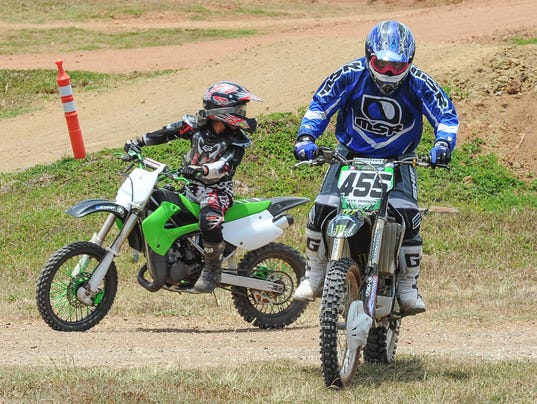 Manny Blas, right, and his son, McKyle Blas, get some practice time on the off-road track on Thursday, April 14, as they prepare to compete in this weekend's 34th annual Guam Smokin’ Wheels event at the Guam International Raceway Park in Yigo.(Photo: Rick Cruz/PDN)

The weekend will be filled with lots of action as Smokin’ Wheels kicks off Friday.

The 34th Annual APL Smokin’ Wheels begins with drag racing Friday night and continues through the weekend with various events, including a car show, ATV and motorcycle racing, and more.

More than 100 world-class racers will be coming from Japan, the Philippines and the mainland United States to compete in the event, it was announced at a press conference at the Guam International Raceway on Thursday.

Henry Simpson, president of the Guam Racing Federation and an owner of the Guam International Raceway, said there are a lot of changes made to the track in preparation for the event. He thanked the various sponsors who helped get the track ready for the long weekend of events as well as APL, which brought many of the cars from off-island.

“We hope to be able to bring in more competitors from other areas as this event gets bigger and bigger in the future,” Simpson said.

John Selleck, APL’s general manager for the region, said the company was thrilled to be in Guam and helping the event be successful.

Simpson, a racing legend on island, won’t be racing for medical reasons, but said he’s excited to see the various son-and-father teams that will be part of the event.

One of those teams will be Joey Crisotomo, president of Cars Plus, and his son. Crisostomo, who’s been racing since Smokin’ Wheels started in the late 1970s, is excited to be part of the event again.

“This is a family event,” he said. “We look forward to a good weekend.”

His kids, his wife and his siblings all come out to the event.

Tom Akigami, Guam International Raceway marketing director, said every year the island’s drifters get better and better, and in time could be competing internationally.

For the love of Acura: Arnaiz speaks on his devotion to Japanese imports

“It’s going to be a really good show,” he said.

Smokin’ Wheels is the largest and longest-running motorsports event in the region, according to a news release, and has been the premier event for off-road endurance racing, off-road buggies, truck challenges, motocross racing, ATV racing, drifting and drag racing.

Schedule is subject to change