A comet or asteroid zipping through space smashed into Jupiter earlier this month, with the impact captured on video by two amateur astronomers on Earth.

Gerrit Kernbauer shot video of the event from the village of Moedling in Austria, using a backyard telescope with a 200-millimetre aperture on March 17, but didn't notice it until he reviewed the video 10 days later.

"I found this strange light spot that appeared for less than one second on the edge of the planetary disc," Kernbauer wrote in the description of the video, which he posted to YouTube on March 26.

"Thinking back to Shoemaker-Levy 9, my only explanation for this is an asteroid or comet that enters Jupiter's high atmosphere and burned up/explode very fast."

Shoemaker-Levy 9, was a comet co-discovered by Americans Carolyn and Eugene Shoemaker and Canadian David Levy in 1993. At that point, it was orbiting Jupiter, and was the first comet ever observed orbiting a planet. Its pieces ended up colliding with Jupiter in July 1994. The event was the first time astronomers had ever directly observed a collision between two solar system objects.

After Kernbauer posted his video, John Mckeon, an amateur astronomer in Ireland, posted a time-lapse video taken using his 11-inch backyard telescope, showing the same impact in the second-last frame.

Mckeon, using the username "bubbleweed," flagged his video on Reddit, where it generated a lot of excitement from a user called AstroMike23, who describes himself as PhD in astronomy who studies giant planet atmospheres at the University of Arizona's Department of Planetary Science, Lunar and Planetary Lab.

"I am 99 per cent sure this is a real impact you caught here," wrote Astromike23. "I've seen extensive modeling and footage of the … Wesley impact, and the amateur video looked exactly like this. The fact that there is corroborating video evidence of this event from another observer practically confirms this as a true impact."

The Wesley impact in 2009 was another instance in which Jupiter got hit and the event was captured by amateur astronomers Anthony Wesley of Australia and Christopher Go of the Philippines. That impact left a dark spot on Jupiter's surface that was later observed in more detail using the Hubble Telescope. 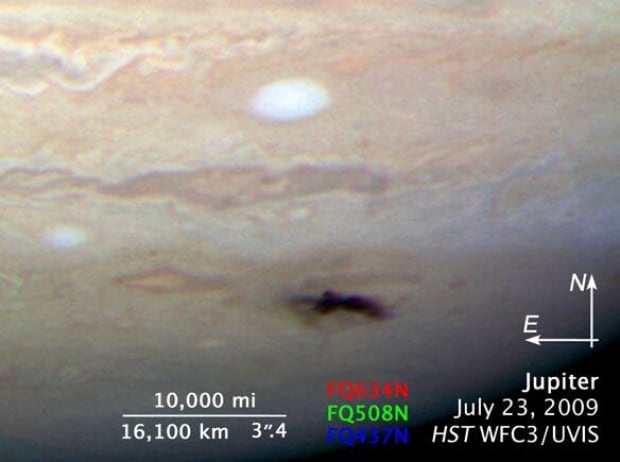 Astromike23 suggested that the bright flash observed was due to the energy released when the asteroid or comet vaporized on impact.

Not a big object

Brett Gladman, an astronomer at the University of British Columbia who studies the impact history of the solar system and objects in the outer solar system, said the object that hit Jupiter didn't need to be very big to produce a flash visible from Earth.

"It may only be tens of metres in size," he said.

In fact, he said, this object was likely comparable to the 45-metre wide Chelyabinsk meteor that exploded over Russia in 2013 with the force of 20 atomic bombs, injuring 1,000 people.

Such an object would hit Jupiter five times faster than Eath and explode with much more force, as the massive planet has a much stronger gravitational pull than Earth.

Gladman added that while Chelyabinsk-sized objects only hit the Earth about once a century, they hit Jupiter far more often because it's farther out in the solar system, where there are a lot more chunks of comets orbiting in addition to asteroids.

"It's also a vastly bigger target, so therefore it's struck much more often than the Earth," he said.

​In this case, he added, it's impossible to tell whether the object was an asteroid or a piece of a comet.

Peter Brown, a researcher with the Meteor Physics Group at Western University in London, Ont., said this is the fifth object that amateur astronomers have captured smashing into Jupiter. The first was the much bigger Wesley impact in 2009, which he estimates was up to half a kilometre wide.

He said smaller impacts are being spotted more often because of the increasing availability of high frame rate video cameras. Those are being used by amateur astronomers to observe Jupiter for hours at a time in the hopes of capturing a clear image during a brief moment when the atmosphere is unusually still.

"It's neat and I expect as more and more people watch, we're going to see more and more of these things — I would guess a few times a year," Brown said.