Since terrorist attacks had struck Europe and the Middle East from the end of last year, many Southeast Asian countries with large Muslim populations are facing greater threats of terrorists attacks.

On April 18, an article in Malaysia’s "New Straits Times" said that the country has become one of the “Tawaghit nations” for the Islamic State group (IS). Leaders from anti-terrorist branch offices in Malaysia have called for strengthening prevention measures to combat terrorism.

In the 14th issue of Dabiq, a magazine published by The IS, Indonesia, Malaysia, the Philippines and other countries with large Muslim populations are mentioned in its ever-expanding target list.

Katibah Nusantara is a branch of IS with about 500-600 members. The organization has produced propaganda videos in Malaysian to recruit people from Southeast Asian countries.

Indonesian terrorists in the Middle East have already arranged attacks in Indonesia.

On January 14, a car exploded on the streets of Jakarta, the Indonesian capital, which caused 7 deaths (including 5 suspects) and 17 people were injured. It was the most serious terrorist attack in Indonesia in recent years. The Islamic State (IS) claimed responsibility. 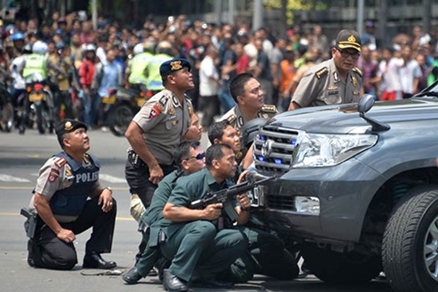 It was planned by Indonesian-Syrian extremists from Syria, aiming to respond to the IS’global terrorist activities, and to create  new organizations of the Islamic State in Southeast Asia.

Abu Sayyaf Group from the Southern Philippine island of Mindanao also has links with IS.  On April 15, a video taken by the group passed a deadline for ransom payment at 3 p.m., April 25, which meant they would execute hostages, including two Canadians, a Norwegian and Filipino.

Since the Arab Spring erupted in the Middle East, the IS had grown rapidly, expanding to occupy large tracts of land of Iraq and Syria, nearly the size of the United Kingdom.  Since 2015, IS’ terrorist activities have expanded globally.

The IS uses the Internet to spread extremist ideas, recruit, and arrange terrorist activities. The IS had set up a website in Chinese last December. According to experts’estimates, IS members have increased from 15,000 at the beginning of last year to 100-150 thousand now.

Native Muslim extremists have gone to the Middle East for “jihad”training.  Afterwards, they return to Southeast Asia to engage in terrorism.

In the second half of 2015, the impact of the IS in Southeast Asia has quickly turned into a major security challenge.  The IS has reportedly strengthened funds and equipment for terrorist attacks in the region.  Many failed attempts at terrorist attacks in Indonesia, Malaysia and other countries were confirmed to have links with IS.

It is necessary to remain vigilant over terrorism threats in Southeast Asia.  With stronger domestic counter-terrorism capacities, Southeast Asian countries can cooperate in and out of the region, to safeguard national and regional economic development and social stability.

Regional counter-terrorism operations should be conducted in domestic and international layers. After the terrorist attack in Jakarta last January, the Indonesian government has integrated existing domestic counter-terrorism agencies, and increased budgets for anti-terrorism.

Measures include strengthening surveillance on extremists, who were released from prison, and curbing IS online publicity and recruitment. Indonesia announced it would strengthen counter-terrorism intelligence and information sharing.

The ASEAN (Association of Southeast Asian Nations) announced a plan to set up a community to help regional countries strengthen counter-terrorism cooperation, and endorse multilateral dialogues with countries outside the region.

China and Southeast Asian nations are connected by land and sea and have similar cultures.  In recent years, both sides have developed friendly relations to become a community of common destiny with interdependence and converging interests.

Some Southeast Asian countries have become China's domestic religious extremists’ channels to the Middle East. Therefore, counter-terrorism in Southeast Asia is related to Beijing’s national security interests.  Beijing's counter-terrorism campaign needs regional support.In early April, at the dialogue meeting between national anti-terrorism departments of China and Southeast Asian countries, which was held in Beijing, Meng Jianzhu, a member of the Political Bureau of the Central Committee of the Communist Party of China (CPC) and head of the Commission for Political and Legal Affairs of the CPC Central Committee, delivered an opening speech and had met with heads of delegations at the conference.

Meng said the spread of international terrorism brings real threats to China and Southeast Asian countries. We must deepen bilateral and multilateral cooperation to combat terrorism.

Beijing can work together with the Southeast Asian countries to implement common, comprehensive, cooperative and sustainable security concepts for Asia.

Chinese President Xi Jinping has put forward at the Fourth CICA Summit, principles to improve a cooperation mechanism, strengthen exchanges of information to build a regional platform that protects people’s lives and properties.

Officials from Southeast Asian countries have pledged to work with Beijing to safeguard regional security and stability.

( The opinions expressed here do not necessarily reflect the opinions of Panview or CCTV.com. )

Panview offers an alternative angle on China and the rest of the world through the analyses and opinions of experts. We also welcome outside submissions, so feel free to send in your own editorials to "globalopinion@vip.cntv.cn" for consideration.