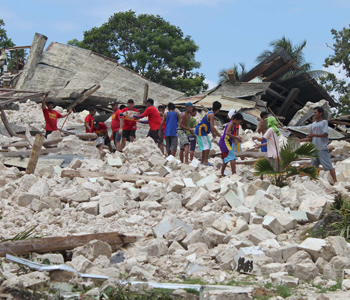 Workers in the town of Loon clear the debris from a church that collapsed in the the 15 October earthquake that struck the southern Philippines island of Bohol. Credit: OCHA/J. Addawe

An earthquake which devastated the province of Bohol in the Philippines in 2013 has turned out to be a development opportunity.

That’s according to the chief of the UN’s World Tourism Organisation (UNWTO).

In the wake of the disaster, the organization helped Bohol to deliver a recovery plan for the region’s tourism sector which would contribute to sustainable development.

UNWTO Secretary-General Taleb Rifai has just returned from a visit to Bohol.

Daniel Dickinson began by asking him about the situation in the aftermath of the earthquake.