Skip to content
You are here
MUMBAI: Swiss private equity fund Partners Group has initiated discussions to sell domestic IT services company CSS Corp, which it had acquired three years ago. The deal values CSS at $400-$450 million.

Preliminary feelers have gone out to home-grown IT bellwethers like Infosys and TCS and bulge bracket private equity funds including the Blackstone Group, Carlyle and Apax Partners. Avendus Capital has been tasked with managing the auction process, multiple sources told ET. "Yes, they are testing the waters. It's at very initial stages but there is enough traction towards the IT services sector, managed by a professional owner," said one of the sources. 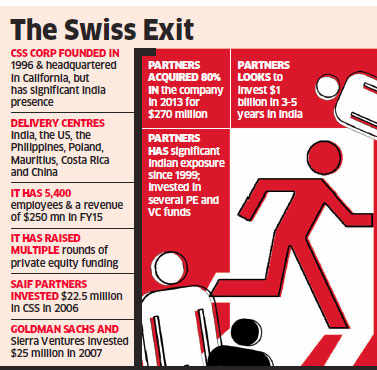 Partners denied any such development. "Unfortunately, these rumours are completely unfounded. There is no exit plan on the horizon and we have not approached any of the firms or companies mentioned," it said in an email response to ET. Blackstone, Carlyle and TCS declined comment. CSS, Apax and Infosys did not reply to the email seeking comments till the time of going to the press.

Partners Group, in partnership with technology entrepreneur Sanjay Chakrabarty, acquired 80% in CSS for $270 million in 2013. Chakrabarty could not be contacted on his mobile.

India's IT services sector has been on the radar of major private equity funds of late. Blackstone acquired 60.5% in MPhasis for $1 billion on Monday. The US private equity giant has invested $1.4 billion over seven months in the Indian technology sector. Carlyle also looking at controlling transactions in the technology space and has participated in several processes.

Apax, on the other hand, partnered with Igate, acquired Patni Computer Systems and sold it to Capgemini last year for $4.1 billion, in what was the biggest private equity exit involving an Indian company.

For Infosys and TCS, the CSS Corp transaction would be a strategic fit. However, both companies have a conservative bent and their limits in a competitive bidding process are yet to be seen, said one of the people in the know. Partners is headquartered in Baar, Switzerland and has direct or indirect investments in over 6,000 companies globally, managing assets worth more than $30 billion.

The PE fund decided to strengthen its India operations in 2012, hiring Cyrus Driver, a former managing director at Helix Partners and JPMorgan's private equity fund. It plans to invest $1billion in India over the next three to five years, its top officials told ET in February.

The fund has backed several regional, local private equity and venture capital funds for over a decade as investor or limited partner and decided to take a direct bet since 2012. It has deployed $800 million across three asset classes of private equity, real estate and infrastructure. Partners has picked up a minority stake in education company Eurokids.

CSS Corp provides a range of services, including mobility solutions, cloud, technical support and remote infrastructure and has revenues of around $250 million in FY15. It provides technology support for enterprise and consumer products, managing IT infrastructure and deploying networks.

The company has a team of over 5,400 professionals and service delivery centres at 13 locations worldwide, including India, the US, the Philippines, Poland, Mauritius, Costa Rica and China. It has over 140 clients, including Fortune 1000 enterprises, its website showed.

The company is building intellectual capability in three areas such as automation of support, providing virtual infrastructure and applying analytics primarily on customer support data. The company is headed by Tiger Ramesh TG, who has cofounded the IT infrastructure management company Bangalore Labs and went on to establish Quintant Services along with Phaneesh Murthy, former CEO of iGate.

Ramesh had built the BPO and BSP businesses at Quintant, which was later acquired and integrated with iGate. The CSS's acquisition was a management buyout, which was crafted by Tiger and Sanjay Chakrabarty.