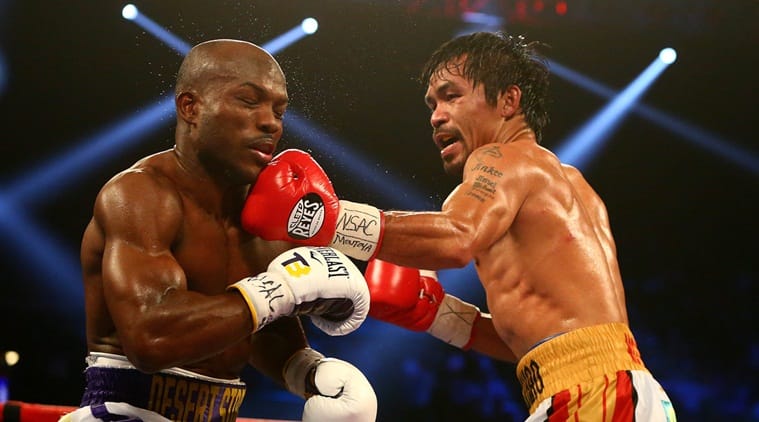 After a slow start narrowly controlled by Bradley, the 37-year-old Pacquiao seized the momentum in the middle portion following a furious fifth round. (Source: USA Today sports)

Manny Pacquiao defeated Timothy Bradley by unanimous decision in the rubber match between the fighters on Saturday, prevailing in what the Filipino has said is the final fight of his career.

Pacquiao, who bounced back from a controversial split-decision defeat to Bradley in 2012 with a decisive win two years later, delivered the final blow in their welterweight clash in Las Vegas as all three judges scored it 116-110 in his favor.

With fans chanting ‘Manny’ at the conclusion, Pacquiao (58-6-2) maintained that he is heading into retirement and continuing his political career in the Philippines.

“I have a commitment to my family that I’m going to retire after this and we don’t know,” Pacquiao told ringside reporters.

“If you ask me about if I’m coming back, maybe I enjoy by being retired and serving and helping the people.”

After a slow start narrowly controlled by Bradley, the 37-year-old Pacquiao seized the momentum in the middle portion following a furious fifth round.

Pacquiao then caught an off balance Bradley with a right hand to the ear to drop him in the seventh, but the American surprisingly bounced back to hurt Pacquiao during the eighth.

From there Pacquiao wrested back control, highlighted by a right uppercut that dropped Bradley in the ninth.

At the strong urging of his trainer Teddy Atlas, Bradley (33-2-1) continued to hang in for the latter rounds though he appeared in trouble at the final bell.

“Every round (I was) looking for a KO but Bradley is a very good boxer,” Pacquiao said of the performance, which may go some way to helping cement his legacy after a disappointing fight against Floyd Mayweather last May.

Mayweather easily won the fight that lacked much action to retire undefeated, though Pacquiao’s support team said afterwards he had suffered a shoulder injury in training beforehand and later needed surgery.

Through thick and thin. Always by my side no matter what. To God be the glory. pic.twitter.com/bGuHo8YVbw