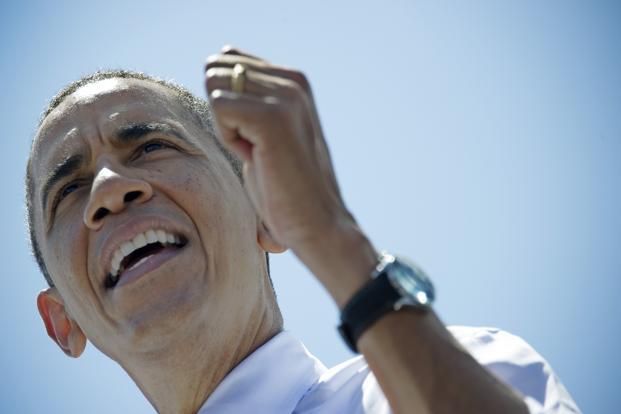 Washington: Prospects for a US law to create a pathway to citizenship for 11 million illegal immigrants brightened on Saturday after major business and labour groups reached an agreement on a guest-worker program, a source familiar with the deal said.

The agreement was reached on Friday night in a conference call between the head of the US chamber of commerce, Tom Donohue, and the president of the AFL-CIO labour organization, Richard Trumka, with New York Democratic Senator Chuck Schumer acting as the mediator, according to the source, who spoke on condition of anonymity.
A guest-worker program has been a major stumbling block to efforts by a bipartisan group of senators known as the Gang of Eight to reach a compromise on a way to create a pathway to citizenship for the 11 million illegal immigrants in the US, most of whom are Hispanics.
Labour unions have argued against a guest-worker program, worrying that a flood of low-wage immigrant labourers would take away jobs from Americans. The agreement covers the pay levels for low-skilled workers and provides labour protections for American workers.
Under the deal, a new “W Visa” would be created for employers to petition for foreign workers in lesser skilled, non-seasonal non-agricultural occupations. This could include jobs in hospitality, janitorial, retail, construction and others.
The W Visa would not be considered a temporary visa as workers would have the ability to seek permanent status after a year, according to details of the agreement released by the AFL-CIO.
The program would begin on 1 April 2015, unless there is a need to extend the start date by six months.
At the beginning, 20,000 visas would be permitted and the figure would rise to 35,000 visas the following year, 55,000 in the third year and 75,000 in the fourth.
The cap can never be below 20,000 or above 200,000 in any year.
Wooing Hispanic Voters
“We have created a new model, a modern visa system that includes both a bureau to collect and analyze labour market data, as well as significant worker protections,” Trumka said in a statement. “We expect that this new program, which benefits not just business, but everyone, will promote long overdue reforms by raising the bar for existing programs.”
Schumer briefed White House chief of staff Denis McDonough on Saturday on the breakthrough, the source said.
The agreement still must be approved by the Gang of Eight senators, four Democrats and four Republicans. If, as expected, they do so, a broad new immigration bill would be advanced in the Senate in the coming weeks.
In recent days, the immigration effort had been stalled by failure to forge an agreement on the guest-worker program, although the White House insisted that progress was being made.
President Barack Obama wants to fulfill a campaign pledge by gaining passage of a law that would create a pathway to citizenship for illegal immigrants currently in the country. He has vowed to do what he can on immigration through executive actions in the absence of legislation.
Immigration long has been a controversial issue in the US and previous efforts to craft a comprehensive overhaul of American immigration laws have failed, with Democrats and Republicans remaining far apart.
Many Republicans previously had taken a hard position against illegal immigrants. Obama’s unsuccessful Republican challenger last year, Mitt Romney, had advocated “self-deportation” of illegal immigrants. Republicans in Arizona and other states passed tough laws cracking down on illegal immigrants.
But the mood for a deal is ripe because Republicans saw Hispanic-Americans vote overwhelmingly for Obama and other Democratic candidates in last November’s elections and they need to woo this increasingly important voting bloc.
Many Republicans see gaining favour with Hispanic voters, who are 10% of the US electorate and growing, as a matter of political survival.
Republicans want to ensure that security along the US-Mexican border is improved before immigrants can get on a path to citizenship. Obama feels security is sufficient but this disagreement is not seen as a deal-breaker.
“We’re seeing right now a good bipartisan spirit,” Obama told Spanish-language network Univision on Wednesday. “I want to encourage that and hopefully we’ll be able to get it done.” Reuters