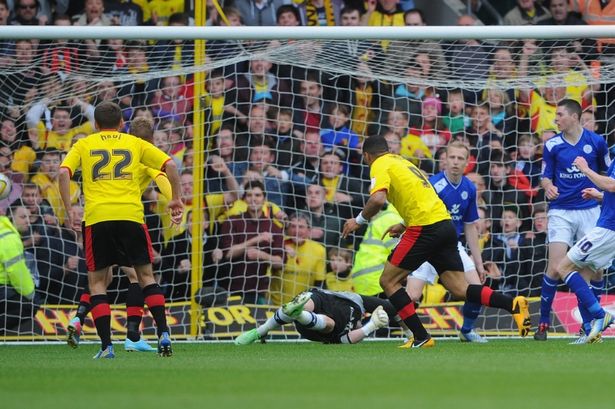 Troy Deeney landed the ultimate Knockaert blow in an incredible finish as Watford went from despair to euphoria in 20 crazy seconds.

In the most sensational climax since, er, Brentford and Doncaster’s identical finale in League One, Deeney’s 20th goal of the season took the Hornets to Wembley – moments after Anthony Knockaert’s penalty had been saved by Manuel Almunia at the other end.

Gianfranco Zola is heading for the “temple” where he won two FA Cup Finals with Chelsea and scored the winner for Italy in a World Cup qualifier in 1997.

The Watford boss went potty when Deeney smashed the winner, charging on to the pitch and then falling over.

But Zola’s celebration was worthy of a barmy finish, which had uncanny similarities to the scenes at Griffin Park 16 days ago. Referee Michael Oliver, who awarded Brentford a dubious penalty in stoppage time on April 27, was at it again.

With the game heading for extra time, French winger Knockaert went down theatrically under Marco Cassetti’s escort and Oliver pointed to the spot.

Incredibly, Almunia saved Knockaert’s penalty with his legs, beat out the rebound and Watford charged down the other end – just like Doncaster at Brentford – and delivered a stunning counter-punch. Substitute Fernando Forestieri’s cross was headed back across goal by Jonathan Hogg and Deeney – back after being sent off against Leeds nine days ago – lifted the roof off the Rookery.

Deeney, who started the season in jail serving four months of a 10-month sentence for affray, sparked a pitch invasion while he rushed to celebrate with his family in the stand.