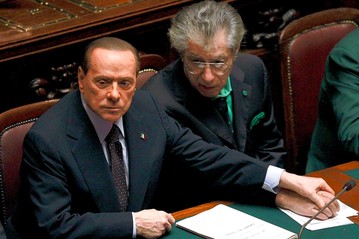 (Reuters) – Italian President Giorgio Napolitano on Saturday ruled out standing down early to make way for new parliamentary elections, after the failure of attempts to form a government this week, saying he would keep trying to find a way out of the deadlock.

Napolitano, whose term ends on May 15, spoke after news reports suggested he might resign to get around constitutional provisions which prevent a president dissolving parliament and calling elections during his final months in office.

“I will continue until the last day of my mandate to do as my sense of national responsibility suggests, without hiding from the country the difficulties that I am still facing,” he told reporters at his Quirinale palace.

But he acknowledged that he had limited scope to force the divided parties to find a way out of political situation that he said was “frozen between irreconcilable positions”.

With investors still mindful of the turmoil that took the euro zone to the brink of disaster in 2011, the gridlock has revived worries about Italy just as the Cyprus banking crisis reopened concern about the stability of the single currency.

Napolitano said he would ask two small groups of experts to formulate proposals for institutional and social and economic reforms that could be supported by all political parties.

He named 10 senior figures including Enrico Giovannini, the head of statistics agency ISTAT, European Affairs Minister Enzo Moavero Milanesi and Bank of Italy board member Salvatore Rossi as well as one senior figure from each of the main parties apart from the anti-establishment 5-Star Movement.

Napolitano met leaders of the main parties on Friday to try to find a way out of the stalemate created by an election which has left Italy facing a return to the polls after no party won a viable majority in parliament.

However with all of the three main formations in parliament clinging to entrenched positions that have prevented a majority being formed, hopes of a solution that would head off potentially destabilizing early elections have faded.

Pier Luigi Bersani, whose center-left alliance has a majority in the lower house but not the Senate, was rebuffed by the populist 5-Star Movement, which rejects deals with the main parties it blames for Italy’s social and economic crisis.

Bersani himself rejected demands by center-right leader Silvio Berlusconi for a cross-party coalition deal that would give the scandal-plagued former prime minister a share in power and the right to decide Napolitano’s successor.

Both Berlusconi’s group and the 5-Star Movement, led by ex-comic Beppe Grillo have also ruled out a new technocrat government like the one led by outgoing Prime Minister Mario Monti, blocking what appears to be the only other option.

Napolitano’s pledge to stay on delayed an immediate crisis but left hopes of progress dependent on parties which are divided less by substantive issues of policy than by deep personal mistrust that has worsened as the standoff has worn on.

Bersani said he would be guided by Napolitano but Berlusconi’s party secretary Angelino Alfano had a more lukewarm response and stuck to demands for a coalition government in which it would play a part.

“Either we have a political government with a grand coalition or we return to vote immediately,” he told Italian daily Corriere della Sera. “If the initiative begun today leads to this outcome, good. Otherwise, the only way is to go straight to the polls with no delay,” he said.

Napolitano stressed that Monti retained full authority at the head of a caretaker administration until a new government can be formed but he will be unable to undertake any significant reforms to Italy’s stagnant economy, now deep in its longest recession for 20 years.

Parliament must soon begin preparations to vote for a new president either to oversee the first steps of a new government or early elections and the battle to choose the next head of state is unlikely to ease the political tensions.

The head of state, elected by a joint sitting of parliament and representatives from the regions, has a broadly defined but at times vital role in overseeing affairs of state, as Napolitano himself has shown repeatedly ever since the last Berlusconi government fell in 2011.

With bond markets closed for the Easter break, investors have been left on the sidelines but a poorly received auction of mid- and long-term debt last week underlined the danger if the crisis drags on.

(Additional reporting by Naomi O’Leary in Rome and Ethan Bilby in Brussels; Writing by James Mackenzie; editing by Barry Moody and Rosalind Russell)