The man whose wife was killed in a hit-and-run crash in Surrey, B.C., last week made an emotional plea for the driver to come forward. 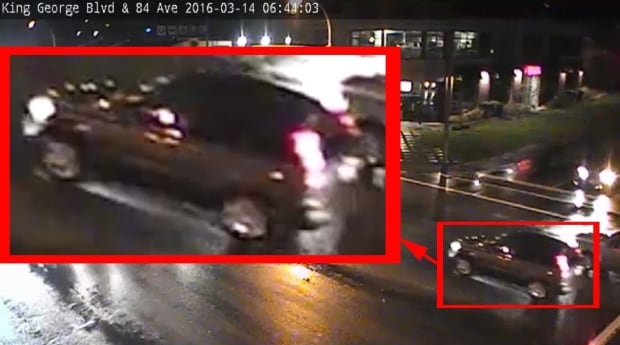 The suspect vehicle is a 2010 or 2011 grey Honda CRV with possible front-end damage. (Dillon Hodgin/CBC)

"That morning she said goodbye and I said bye and I'll see you and I love you," Belcourt said."I get a pounding on the door 15 minutes later by the RCMP to tell me that my wife was hit on King George Highway."

"My wife was very special to me. She was basically my life and my support," he said. "I miss her so much. To the driver of the vehicle who took her life, please come forward now so that my family can have closure."

Belcourt plans on taking Josie's ashes to her family in the Philippines.

Belcourt was about to move into a new home with his wife. Says he can't go there now. Staying in a motel. pic.twitter.com/Y4umOV74HF

He calls the driver's actions cowardly, but says his wife was the type of person who probably would have forgiven them.

Anyone with more information about this collision is asked to contact Surrey RCMP at 604-599-0502 or Crime Stoppers.