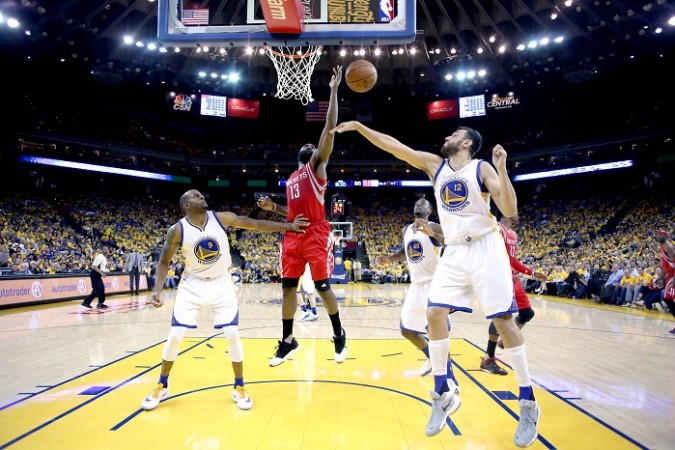 Rockets need to find their feet against Warriors on Thursday. Pictured: James Harden (13) is unable to make a shot between Golden State Warriors guard Andre Iguodala (9) and center Andrew Bogut (12) at Oracle Arena on April 18.Reuters

The Golden State Warriors enjoy a healthy 2-0 lead over Houston Rockets in the NBA Playoffs and are looking to stretch their lead as they take on James Harden and co. at Toyota Center on Thursday for Game 3. However, Stephen Curry, who missed Game 2, is still doubtful for the away clash.

Despite not having their star player Curry, the Warriors looked good as they defeated Rockets, score reading 115-106 at the Oracle Arena in Game 2. With Warriors leading 2-0, they will only play Curry if he is 100 percent fit.

"We'll see how he responds the next couple of days, and if he's not right, obviously being up 2-0 does give us more cushion if we decide to sit him,'' Fox Sports quoted Warriors' coach Steve Kerr as saying.

''But it will be based on his health, not the series score. It's really what the training staff says and what Steph says about how he's feeling.''

Even if Curry remains unavailable, the Warriors have enough depth in their squad, and with players like Klay Thompson and Draymond Green, they can win their third straight game in the 2016 playoffs.

Shaun Livingston replaced Curry in Game 2, but no player can bring what Curry brings to the Warriors, feels Green.

''When Steph goes down, that's obviously not easy to replace, so not one guy's going to come out and do what Steph does for this team,'' Green said.

''Even if a guy comes out and gets 30, he's still not going to do what or bring what Steph brings to this team. He draws so much attention that he gets other people shots as well. ... I think we're the deepest team in the NBA.''

Irrespective of whether Curry plays or not, the Rockets have to defeat Warriors, and get back into the best of seven series. The Rockets duo -- James Harden and Dwight Howard -- were superb last season, shining in the playoffs, but they have not been able to replicate such scintillating performances.

Their interim coach, J.B. Bickerstaff, is aware of the quality Warriors side and the need to up their game, to challenge the visitors.

''We understand our opponent. We understand how good they are as a team and the drive they have," Bickerstaff said. "We can't look at it's a night off for us or anything like that (if Curry is out). We've got to go out and play twice as hard and try to win.''

Viewers in the US can watch the Houston Rockets vs Golden State Warriors NBA playoff game 3 live on TNT,with live streaming on TNT Online. BT Sport will provide live coverage of the NBA Playoff game in the UK, while live streaming option is on Watch BT Sport.

Viewers in the Philippines can watch the game on NBA Premium.