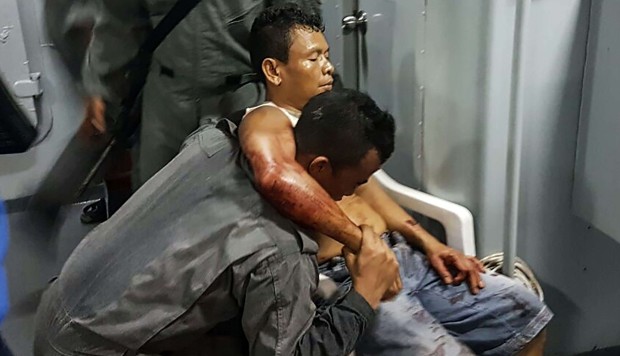 Gunmen have abducted four Indonesian sailors and shot and wounded one crew member on the high seas off the east coast of Malaysia’s Sabah state, waters where Abu Sayyaf militants are known to operate, a senior police official said on Saturday.

If the Philippines-based Abu Sayyaf is confirmed to be behind the kidnapping, it would be their third such hostage-taking in as many weeks and comes amid a surge in such attacks.

“The incident happened late Friday in international waters. Four Indonesian seamen were abducted by the kidnappers. One man was shot and is being treated at a hospital,” Abdul Rashid Harun, Sabah police chief said.

The tugboat carrying coal was sailing from Cebu in the Philippines back to Tarakan in Borneo, Indonesia, when the kidnappings occurred. Six other seaman on the tugboat, including the wounded man, managed to escape.

Four Indonesian seamen were abducted by the kidnappers. One man was shot and is being treated at a hospital

In a bid to curb kidnappings, Malaysia has imposed a temporary ban on the trade route between Sabah and the southern Philippines.

“The government has suspended barter trade between the two regions until a comprehensive plan is formulated to ensure the safety and security of Sabah state. It is a temporary ban,” Abdul Rahim Abdullah, marine police chief, said.

“We have deployed marine police boats along with ships from the maritime enforcement agency and the navy to enforce the ban,” he added.

On April 1, four Malaysian sailors were kidnapped from a ship near Sabah’s Ligitan island. It is still unconfirmed who was responsible for that kidnapping.

Several days earlier 10 Indonesian sailors were kidnapped in waters off the southern Philippines, with initial information indicating the sailors may have been taken by an Abu Sayyaf faction to Sulu, a remote southern island that is a hideout of the militant outfit.

Someone claiming to be from Abu Sayyaf called the vessel’s owners to demand a ransom for the sailors’ release.

Many Western and other embassies routinely issue warnings against travelling to most of the Philippines’ Muslim-populated southern regions, which lie just northeast of Sabah, because of the risk of being abducted by the group.

In the past Abu Sayyaf has mainly targeted tourists as they can demand high ransoms for foreigners.

Two Canadians and a Norwegian were kidnapped from yachts at a marina in September, with the militants setting an April deadline for a ransom to be paid.

The militants in a video demanded one billion pesos (US$21 million) for each of the three foreigners.

Since the April 8 ransom deadline passed there has been no word on the hostages’ fate.

Last year, Malaysian Bernard Then was kidnapped from a seaside restaurant in Sabah, about 300km from the Abu Sayyaf’s Jolo stronghold. He was later killed by the group.