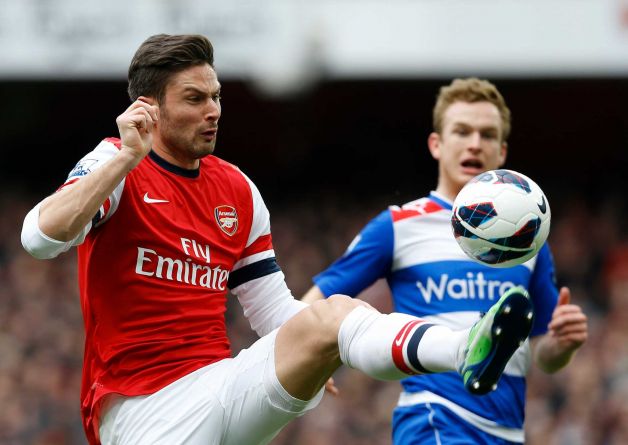 Gervinho scored one goal and set up two others as Arsenal beat Reading 4-1 on Saturday, boosting its chances of Champions League football next season and ruining Nigel Adkins’ return to managerial life in the Premier League.

The Ivory Coast forward set Arsenal on its way with the opener in the 11th minute and then provided assists for Santi Cazorla and Olivier Giroud to net in the second half.

Hal Robson-Kanu pulled a goal back for Reading, but Mikel Arteta ended the struggling visitors’ hopes of an unlikely comeback by slotting home a penalty 13 minutes from time.

The victory lifts Arsenal to within two points of fourth-place Chelsea and drops Reading provisionally bottom of the table after Adkins’ first game in charge of the club.

“I thought Arsenal were very good, they’ve passed the ball very well,” said Adkins, who was fired by Southampton in January. “Unfortunately, we’ve made our own downfall on a couple of goals.”

The Emirates Stadium wasn’t exactly an ideal venue for Adkins to resume his coaching career, with Arsenal full of confidence after back-to-back 2-0 wins against Bayern Munich and Swansea before the international break.

And Gervinho, back in favor at Arsenal following a mid-season slump in form, continued the team’s momentum by smashing in from close range after Cazorla drove in a cross. The Ivory Coast forward also scored against Swansea.

“He was always lively and created many dangerous situations,” Wenger said of the much-maligned Gervinho.