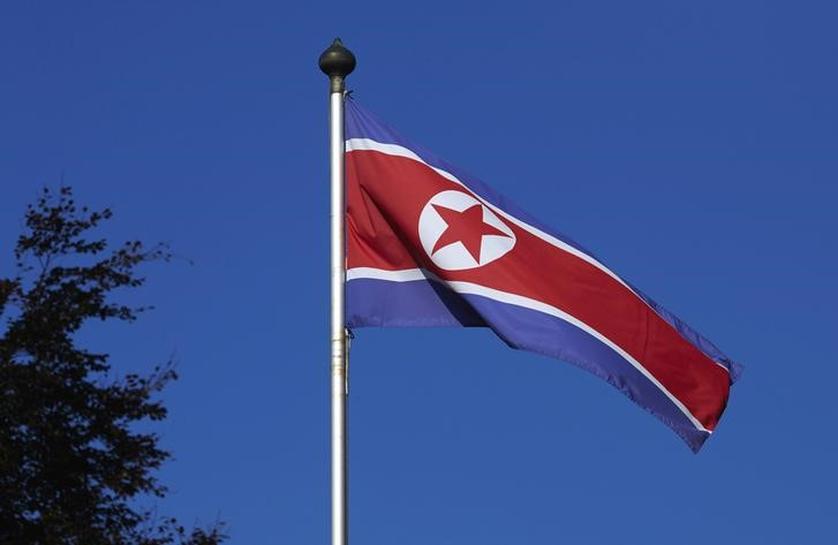 A North Korean flag flies on a mast at the Permanent Mission of North Korea in Geneva October 2, 2014.

UNITED NATIONS/SEOUL The U.N. Security Council agreed on Monday to a Chinese request to remove sanctions on four ships the United Nations had blacklisted for ties to Pyongyang's arms trade. The agreement came after China secured assurances the vessels would not use North Korean crews, a U.S. official said.

China asked the United States on March 16 for help removing the ships from the U.N. blacklist, according to a diplomatic cable sent the same day from the U.S. permanent mission at the United Nations to a group of other U.S. embassies.

The cable, reviewed by Reuters, showed wrangling between top diplomats from the United States and China over the tough new North Korea sanctions, weeks after Washington had presented a united front with Beijing, Pyongyang's main ally and trade partner.

The U.S. mission at the United Nations declined to comment on the cable or make its ambassador, Samantha Power, available for an interview about the cable. The U.S. Treasury Department, which administers U.S. economic and financial sanctions, also declined to comment.

The removal of the four ships was confirmed in a press release, which was seen by Reuters and will soon be issued by the Security Council, according to U.N. diplomats.

While Washington has been the driving force behind the toughening international sanctions regime, China conducts 90 percent of the trade with North Korea and is the key to enforcing them.

The ships were among 31 vessels sanctioned by the 15-member council on March 2 because they were linked to Ocean Maritime Management (OMM), a North Korean shipping firm known to transport arms and other illicit goods for the secretive state. [nL2N16A112]

"We discovered that they are not OMM ships," Chinese U.N. Ambassador Liu Jieyi told Reuters on Monday. "The basis for the listing of the ships is basically that they belong to OMM, so if you make a mistake, then you correct the mistake."

U.S. and other Western officials have said all the original listings were carefully vetted before the ships were added to the blacklist. That list was appended to the sweeping Security Council resolutions implemented on March 2, following North Korea's fourth nuclear test in January.

The U.S. official, speaking on condition of anonymity, said the Security Council committee on North Korea sanctions agreed to the request after China secured written commitments the four ships would no longer use North Korean crews.

The four ships include the Jin Teng, a cargo ship detained by the Philippines days after the sanctions took effect.

"We're pleased with the outcome," said the U.S. official. "It achieved an impact, a real world outcome."

He added it was a sign of a "productive working relationship with China" on North Korea and that it was "gratifying to see such instant real-world effects" of the U.N. sanctions regime.

Liu had raised the issue of the four sanctioned vessels last week in a meeting with Power, his U.S. counterpart, according to the cable reviewed by Reuters.

Power approved the unclassified cable, which went from the U.S. mission at the U.N. to American embassies in Manila, Tokyo and Seoul. The cable pointed to American frustration with what U.S. officials characterized as China's attempts to hold up the routine renewal of a U.N. panel of experts in return for de-listing the ships.

The panel is made up of a team of international experts who monitor and research potential breaches of resolutions against North Korea and recommend entities that could be sanctioned.

Liu had asked Power's help in removing the ships from the list in an "easy, smooth and quick way," to get the panel renewed, according to the document's characterisation of Liu's request. The easiest way, Liu said, "would be to work quickly to get all these issues settled," according to the cable.

Power told Liu China's linking of the issues and attempts to hold up the renewal of the panel was "not going over well in Washington," according to the cable, and asked China to let the renewal go forward.

"You don't need to blackmail us, Power said, as we are indeed interested in operating in good faith," the cable says of Power's conversation with Liu.

Liu told Reuters on Monday he expected the experts panel would be "renewed according to the normal procedure in the Security Council".