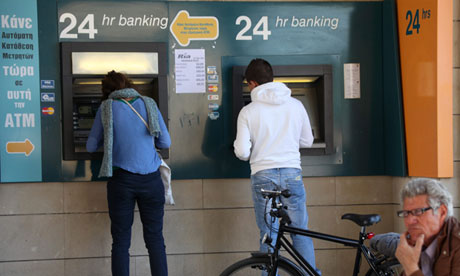 (Reuters) – Major depositors in Cyprus’s biggest bank will lose around 60 percent of savings over 100,000 euros, its central bank confirmed on Saturday, sharpening the terms of a bailout that has shaken European banks but saved the island from bankruptcy.

Initial signs that big depositors in Bank of Cyprus would take a hit of 30 to 40 percent – the first time the euro zone has made bank customers contribute to a bailout – had already unnerved investors in European lenders this week.

But the official decree published on Saturday confirmed a Reuters report a day earlier that the bank would give depositors shares worth just 37.5 percent of savings over 100,000 euros. The rest of such holdings might never be paid back.

The toughening of the terms sends a clear signal that the bailout means the end of Cyprus as a hub for offshore finance and could accelerate economic decline on the island and bring steeper job losses.

Banks reopened to relative calm on Thursday after the imposition of the first capital controls the euro has seen since it was launched a decade ago.

The streets of Nicosia were filled with crowds relaxing in its cafes and bars on Saturday, but popular anger was not hard to find.

“Europe shouldn’t have allowed this disaster to happen here. Cyprus was paradise and they’ve turned it into hell,” said Tryfonas Neokleous, owner of a clothes shop on a cobbled street in the center of the city.

He said he didn’t except business to pick up even now that the banks were open again after an almost two-week shutdown.

“I don’t expect anything and I don’t hope for anything anymore. People are going to spend their money on food and everything else they’ve been deprived of the last 15 days.”

There are no signs for now that bank customers in other struggling euro zone countries likeGreece, Italy or Spain taking fright at the precedent set by the bailout.

European officials have worked hard this week to stress that the island’s bailout was a unique case – after a suggestion by Eurogroup chairman Jeroen Dijsselbloem that the rescue would serve as a model for future crises rattled European financial markets.

“Together in the Eurogroup we decided to have the owners and creditors take part in the costs of the rescue – in other words those who helped cause the crisis,” said Schaeuble, one of the architects of the euro zone’s response to a debt crisis now in its fourth year.

“Cyprus’s economy will now go through a long and painful period of adjustment. But then it will pay back the loan.”

Cypriot President Nicos Anastasiades said on Friday that the 10-billion euro ($13 billion) bailout had contained the risk of national bankruptcy and would prevent it from leaving the euro.

Cypriots, however, are angry at the price attached to the rescue – the winding down of the island’s second-largest bank, Cyprus Popular Bank, also known as Laiki, and an unprecedented raid on deposits over 100,000 euros.

“We’re numb. People are numb. But their hidden hope is that something good will happen eventually,” said Pantelis Panayotou, 70, a jeweler whose stands in his shop are half empty.

The island has seen none of the angry street violence that frequently erupts in Greece but peaceful protests by students and bank workers have become an almost daily occurrence. At least 2,000 students protested outside parliament this week.

Etyk, a bank workers’ union, called a rally outside parliament for Thursday to protest against potential job cuts and a hit on their pension funds.

Under the terms of Saturday’s decree, the assets of Laiki will be transferred to Bank of Cyprus. At Bank of Cyprus, about 22.5 percent of deposits over 100,000 euros will attract no interest. The remaining 40 percent will continue to attract interest, but will not be repaid unless the bank does well.

Those with deposits under 100,000 euros will continue to be protected under the state’s deposit guarantee.

The imposition of the capital controls has led economists to warn that a second-class “Cyprus euro” could emerge, with funds trapped on the island less valuable than euros that can be freely spent abroad.

Among other things Cypriots and foreigners are allowed to take only up to 1,000 euros in cash when they leave the island.

Anastasiades said the restrictions – unprecedented in the currency bloc since euro coins and banknotes entered circulation in 2002 – would be gradually lifted. He gave no time frame but the central bank said the measures would be reviewed daily. ($1 = 0.7788 euros)