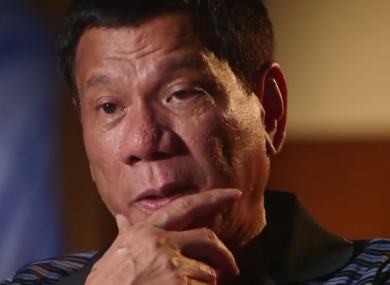 LEADING PHILIPPINE PRESIDENTIAL candidate Rodrigo Duterte, whose campaign promises a ruthless war on crime, was angrily condemned today after a video surfaced of him joking about a murdered Australian rape victim.

Duterte, who promises mass killings of suspected criminals if elected next month, appears in a video uploaded on YouTube making the joke about the female Australian missionary.

The missionary, who was ministering in a prison in Davao in the southern Philippines, was raped and killed during a riot by inmates in 1989.

Duterte was the city mayor at the time.

“They raped all of the women… There was this Australian lay minister… when they took them out… I saw her face and I thought, ‘Son of a bitch. what a pity… they raped her, they all lined up. I was mad she was raped but she was so beautiful. I thought, the mayor should have been first,’” Duterte is shown telling a crowd of laughing supporters at a campaign rally.

Duterte, who boasts of the extra-judicial killings of suspects by vigilantes during his time in Davao, is the preferred candidate in the run-up to the 9 May election, according to the latest opinion survey on 3 April.

His rivals, women’s groups and commentators on social media quickly denounced his remarks.

President Benigno Aquino’s spokesman Herminio Coloma said the comments show “his lack of fitness for the presidency” and his “utter lack of respect for women”.

Aquino, who under the constitution cannot seek a second term, is supporting another candidate, his former interior secretary Mar Roxas who trails Duterte in opinion surveys.

“You are a crazy maniac who doesn’t respect women and doesn’t deserve to be president,” Binay told Duterte in a statement.

Another candidate Senator Grace Poe, who is just behind Duterte in the surveys, called his comment “distasteful and unacceptable, and reflects his disrespect for women”.

I broke down after watching Duterte on Aussie rape. I can’t fathom how his followers can laugh at it.

Women’s group Gabriela attacked Duterte’s remarks, saying rape or any other form of sexual abuse was not a joke “nor something to be trivialised in a joke”, especially by someone seeking the presidency.

Many Filipinos have embraced Duterte for his vulgarity-laced speeches, his boasts of sexual conquests and his promised war on crime.

Even when he called Pope Francis a “son of a whore,” in a speech last November, his followers in the devoutly Catholic nation quickly forgave him.

Spokesmen for Duterte had no immediate comment when approached by AFP. Many of his followers brushed off the controversy.

“We won’t apologise for he has done nothing wrong, it was a clear joke for God’s sake,” one Filipina supporter said on Twitter.

Read: Refugees taken in by the Pope hail the pontiff a “saviour”