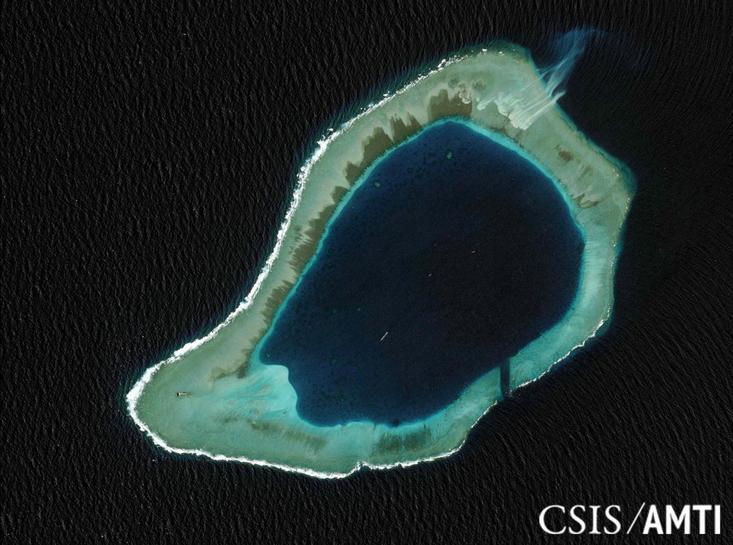 WASHINGTON/BEIJING The Pentagon on Tuesday called on China to reaffirm it has no plans to deploy military aircraft in the Spratly Islands after Beijing used a military plane to evacuate sick workers from a new airstrip on an island it has created in the disputed South China Sea.

China's Defence Ministry earlier dismissed U.S. queries as to why China had used a military aircraft rather than a civilian one in Sunday's evacuation from Fiery Cross Reef.

U.S. State Department spokesman John Kirby told a regular news briefing it was "difficult to understand" why China would have had to use a military aircraft for the evacuation. He also said it was "a problem" that the workers had apparently been working on "infrastructure improvements of a military nature."

A Pentagon spokesman, Commander Gary Ross, called on China to clarify its intentions.

"We urge China to reaffirm that it has no plans to deploy or rotate military aircraft at its outposts in the Spratlys, in keeping with China's prior assurances," he said.

Ross also called on all rivals in the South China Sea to clarify their claims in accordance with international law and "to avoid unilateral actions that change the status quo."

China's Defence Ministry said Beijing had indisputable sovereignty over the Spratly Islands and the United States had no right to comment on Chinese building works and defensive facilities there.

It said it was Chinese military tradition to "wholeheartedly serve the people" and help those in need.

"In sharp contrast, the U.S. side is expressing doubts about whether it's a military or civilian aircraft at a time when somebody's life is in danger," it said.

"We cannot but ask: if a U.S. citizen suddenly took ill on U.S. soil, would the U.S. military look on with folded arms?"

Chinese activity in disputed waters of the South China Sea, including the construction of islands by dredging sand onto reefs and shoals in the Spratly archipelago, has alarmed rival claimants, particularly the Philippines and Vietnam.

The United States has repeatedly criticised the construction of the islands and worries that China plans to use them for military purposes. It worries that trade in what is one of the world's busiest waterways could be threatened, but China says it has no hostile intent.

The runway on the Fiery Cross Reef is 3,000 metres (10,000 feet) long and is one of three China has been building in the archipelago.

Civilian flights began test runs there in January but Sunday's landing was the first China has publicly reported by a military plane at Fiery Cross Reef.