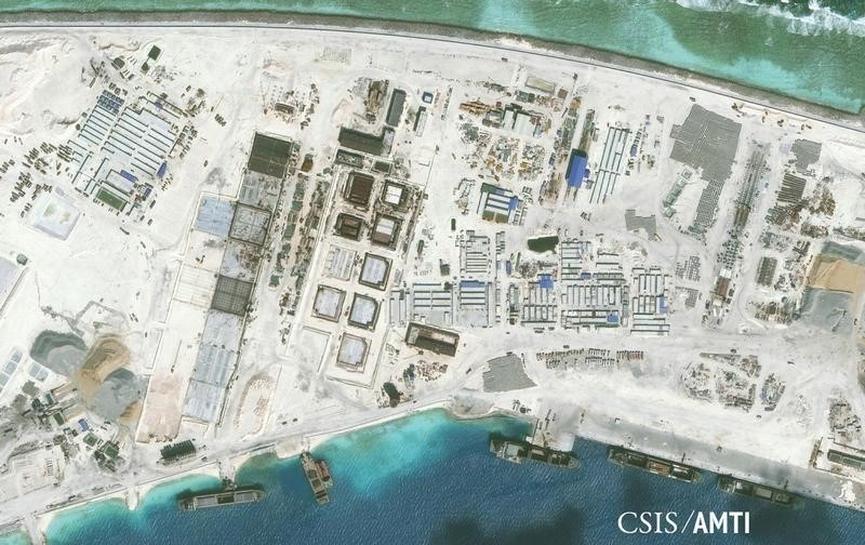 The northwest side of Mischief Reef showing a 1,900 foot seawall and newly-constructed infrastructure including housing, an artificial turf parade grounds, cement plants, and docking facilities are shown in this Center for Strategic and International Studies (CSIS) Asia...

BEIJING China has agreed with Brunei, Cambodia and Laos that the South China Sea territorial dispute should not affect relations between China and the Association of South East Asian National (ASEAN), China's Foreign Ministry said on Sunday.

Four members of the 10-member ASEAN - the Philippines, Vietnam, Malaysia and Brunei - have rival claims to parts of the South China Sea with China, which says virtually the entire sea belongs to it. China is the biggest trade partner of many ASEAN nations.

China's Foreign Minister Wang Yi spoke to reporters in the Lao capital, Vientiane, on Saturday and was quoted by his ministry as saying China had reached "an important consensus" with Brunei, Cambodia and Laos.

The South China Sea problem was not a China-ASEAN dispute and it "should not affect China-ASEAN relations”, the ministry said in a statement, referring to their agreement.

China's maritime claims are ASEAN's most contentious issue, as its members struggle to balance mutual support with their growing economic relations with China.

The grouping, which also includes Singapore, Indonesia, Thailand and Myanmar, expressed in February its serious concern about growing international tension over the disputed waters.

Land reclamation and escalating activity has increased tension and could undermine peace, security and stability in the region, ASEAN said in a statement at that time.

The United States has criticized China's building of artificial islands and facilities in the sea and has sailed warships close to disputed territory to assert the right to freedom of navigation.

China seeks to keep the South China Sea off of the agenda at multilateral forum, but other claimant countries, such as the Philippines, have sought to raise the issue at ASEAN summits.

The dispute has been divisive for ASEAN.

Cambodia, a close Chinese ally, was accused of driving a wedge in the bloc in 2012 when its refusal to be drawn on China's actions in the sea resulted in a customary communique at the end of an ASEAN summit not being issued for the first time.