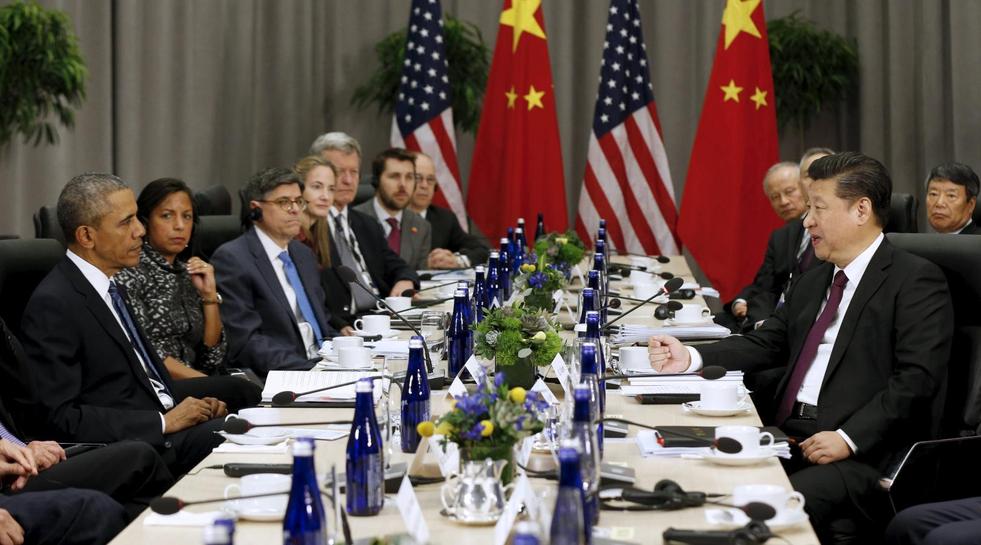 Meeting on the sidelines of a nuclear security summit in Washington, Xi and Obama agreed to step up cooperation to ensure nuclear security worldwide and to do more on cyber security. They also agreed to continue to work on a bilateral investment treaty, China's assistant foreign minister, Zheng Zeguang, told a news briefing.

But Zheng made clear that China and the United States remained at odds over the contested South China Sea, where Beijing's broad territorial claims have riled its neighbours, and over U.S. missile defence plans following North Korea's recent nuclear and rocket tests.

Xi told Obama that he hoped Washington would "strictly" abide by its commitment not to take a position on sovereignty issues and instead play a constructive role to maintain peace and stability, Zheng said.

"The hope is that all parties will correctly view and handle the South China Sea and adopt an objective and impartial attitude ... particularly countries outside this region," he said.

China's official Xinhua news agency also quoted Xi as warning that China would not accept violations of its sovereignty in the name of freedom of navigation - a reference to air and naval patrols the United States has conducted within what China considers its territorial waters.

China claims most of the South China Sea, through which about $5 trillion in ship-borne trade passes every year. Neighbours Brunei, Malaysia, the Philippines, Taiwan and Vietnam also have claims.

The United States says it takes no sides in the disputes but wants to ensure free navigation. It has said it will increase what it calls freedom-of-navigation operations by its Navy ships through the waters.

Obama, speaking after an earlier meeting with the leaders of Japan and South Korea, said the three countries shared a common vision for the Asia-Pacific based on "a rules-based order in which all countries, regardless of size, act according to shared norms and shared principles," in an apparent criticism of China's pursuit of territorial claims in East Asia.

U.S. officials have expressed concern that Beijing could declare an air defence identification zone, or ADIZ, in the region, as it did in the East China Sea in 2013.

On Wednesday, U.S. Deputy Secretary of Defense Robert Work said the United States had told China it would not recognise an exclusion zone in the South China Sea and would view such a move as "destabilising."

"Such deployment will undermine China's security interests and will affect this region's strategic balance," he said.

The United States and South Korea began talks last month on possible THAAD deployment. China backed tough new sanctions on North Korea following its nuclear and rocket tests but complains that THAAD has a range that would extend far beyond the Korean peninsula and into China.