Speaking in the council chambers at Thunder Bay City Hall, Johnston said the recipients' acts of kindness help change the culture of their entire community.

He also recounted how a random act of kindness helped him, back when he was a young hockey player in Sault Ste. Marie, Ont. 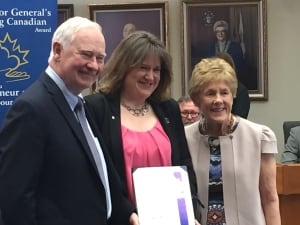 "I had never had a piece of new equipment.  I had third, fourth – hand-me-down equipment," Johnston said. "The owner of a sporting goods store rang my home the day before the game and said 'come in an hour before the game. I've got something for you.' And I came in and he gave me a new pair of skates. ... Well I'll tell you I scored three goals that night," he said.

"As much as those new skates helped, it was that man's faith in my abilities I think that helped me on the ice that night."

For over 15 years, Sharon Bak has assisted people affected by loss and hardship as a disaster management volunteer with the Canadian Red Cross. She has helped provide short-term responses, whether by administering goods and services or social supports, as well as leadership and guidance in the field and in times of great need.

Sue-Ellen Blekkenhorst has been helping people for 20 years through the Red Cross, Persons United for Self-Help (PUSH Northwest), and the Community Volunteer Income Tax Program. Through her volunteer work, she has demonstrated her commitment to her community and to bringing people together.

For over 25 years, Jamie Boston has been involved with the Army Cadet program as a volunteer and a civilian instructor. In 2013, he co-founded the Algoma Autism Foundation, which promotes inclusion and awareness in communities across North America.

For several years, Peter Cloidt has been providing free income tax services to developmentally challenged people in the Thunder Bay region. He also volunteers with the Canadian Cancer Society by assisting chemotherapy and radiation patients with their transportation needs.

Sharon Corston has long been dedicated to Special Olympics Canada, the Anglican and Evangelical Lutheran Group, the Federated Women's Institutes, and the Community Volunteer Income Tax Program. Most recently, her work has centred on alleviating poverty in Thunder Bay.

For over 25 years, Debbie Demers has been actively involved in her community. The Club Lions d'Earlton, the Fondation communautaire du Temiskaming, the Paroisse St-Jean-Baptiste d'Earlton and the Earlton Steam and Antique Show have all benefitted from her leadership and dedication.

Valerie Dennison has been dedicated to the well-being of the people of the Thunder Bay area for over 50 years as a volunteer with Meals on Wheels, the Thunder Bay District Health Unit, the Alzheimer's Society and the Thunder Bay Regional Health Sciences Centre.

Jerome Harvey has striven to make health care more accessible for people around the world for over 40 years as the CEO and founder of the Medical Equipment Modernization Opportunity (MEMO). He has helped ship 62 ocean containers of health equipment to Cuba, Liberia and the Philippines.

Cliff Huber has been a volunteer in the Thunder Bay area for over 50 years, coaching sports teams, teaching basic computer skills, and working in the collective interests of seniors and the community through Retired Teachers of Ontario.

For nearly 20 years, Nora Kolmel has been serving her community as a member of and a volunteer with the Red Lake Lions Club and the Community Volunteer Income Tax Program, helping seniors, low income families and persons with disabilities.

For several years, Pam Kosola has been helping people through the Community Volunteer Income Tax Program, provided by the Lakehead Social Planning Council. She also volunteers at the local Shelter House, where she prepares meals and helps those less fortunate.

For four years, Jennifer Kushnir has been running the Community Volunteer Income Tax Program at the Seven Generations Education Institute. Her efforts help Aboriginal peoples around Thunder Bay thrive as individuals, as well as within a larger culture and community.

Rajoo Makhi is building a more responsible citizenry throughout the Thunder Bay area by helping people with their taxes and providing assistance at homeless shelters. Those he helps are faced with a range of challenges, from financial limitations and physical disabilities to language barriers.

Glen Sharpe, an avid supporter of the Aboriginal community with roots among the Mohawks of the Bay of Quinte, has devoted his life to teaching others, mentoring Aboriginal youth and passing on his wisdom to the next generation in his community.

For nearly 30 years, Gerrie Vanduyn has laboured to help those in need in the Thunder Bay area. She established the Christian Reform Church Volunteer Group at the Dew Drop Inn soup kitchen, where she remains a committed volunteer and the group's coordinator.

During the four years he was in high school, Daniel-Kwaku Voss joined various councils to represent youth in his community. He also helped launch Youth Tbay and the Thunder Bay Youth Connections Coalition, which provides safe and positive environments for local youth.

Brian Vroomen has been helping families and individuals thrive, having served as president of both the Patricia Centre for Children and Youth and Integrated Services Northwest over the past 10 years. He also continues his efforts through the Community Volunteer Income Tax Program.

For over 15 years, Chantal Walterson has helped low income families and people affected by poverty through her work at the Greenstone Harvest Centre, the Community Volunteer Income Tax Program, and the Royal Canadian Legion.