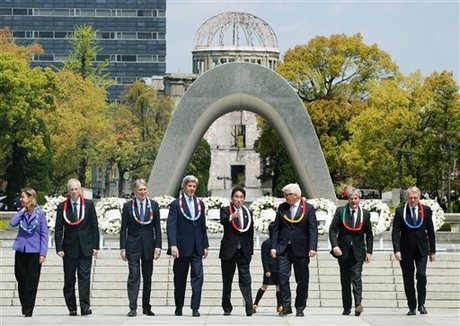 Beijing has summoned top diplomatic representatives from the Group of Seven nations to express anger at their statement on the South China Sea, the foreign ministry said Wednesday.

A two-day meeting of G7 foreign ministers -- a grouping that excludes China -- in the Japanese city of Hiroshima issued a joint statement this week saying: "We are concerned about the situation in the East and South China Seas, and emphasize the fundamental importance of peaceful management and settlement of disputes."

The G7 statement did not name China but Beijing lays claim to almost all of the South China Sea despite conflicting partial claims from Brunei, Malaysia, Vietnam, Taiwan and the Philippines.

"A senior official of one of the G7 countries mentioned that China needs to heed the voice of G7", Lu said in a comment that seemed to be aimed at Japan.

Tokyo has its own dispute with Beijing in the East China Sea over uninhabited islands that it administers but that are also claimed by China.

The G7 also urged "all states to refrain from such actions as land reclamations" and "building of outposts... for military purposes".

Beijing has built up artificial islands in the South China Sea, some of them equipped with runways 3,000 meters long.

"We believe that they shouldn't make relevant remarks," Lu said. The ministers, he added, "are just trying to amuse themselves by issuing such statements."