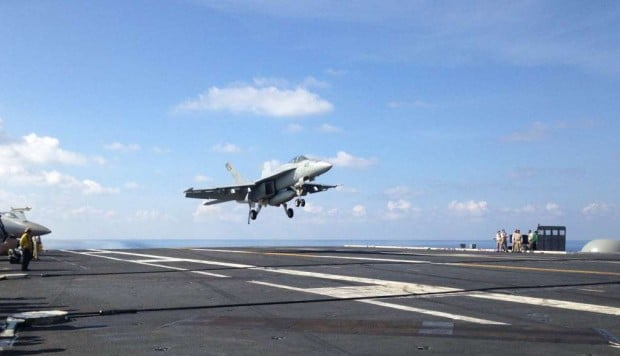 China is lobbying Russia for support in opposing international court proceedings launched by the Philippines over the disputed South China Sea.

“Both China and Russia should stay on guard against abuses of mandatory arbitration,” Wang said yesterday.

US to give Philippines eye in the sky – US$42m worth of sensors, radars – to track South China Sea activity

A communique after a meeting between Wang, Lavrov, and Indian External Affairs Minister Sushma Swaraj said all related disputes in the South China Sea should be addressed through negotiations and agreements ­between the parties concerned. Neither Russia nor India are claimants in the sea.

Analysts said Wang’s remarks were China’s way of ratcheting up preparations for the court ruling, which is expected in May or June.

Hugo Swire, British minister of state responsible for East Asia, said the ruling from the Permanent Court of Arbitration in The Hague must be binding.

This month, the European Union urged China to respect the ruling of the international tribunal, and the foreign ministers of the Group of Seven industrialised nations ­expressed concerns over the South China Sea tensions.

Lavrov said last week it was necessary to stop any attempts to internationalise the disputes.

Observers said Wang’s remarks showed China was facing huge diplomatic pressure, with more nations appearing to back the Philippines, and it was hoping to drum up support.

“China is almost isolated in the saga,” Li Xing, a professor of international relations at Beijing Normal University, said. “As strategic partners, China and Russia are taking care of each other’s core interests and ­coordinating.”

Russia is also facing a lawsuit at the Permanent Court of Arbitration launched by a Ukrainian businessman over his right to operate a passenger airport in ­Crimea after Russia annexed the peninsula. Moscow has said the court has no jurisdiction over the matter.

The meeting between Wang and Lavrov was held ahead of an expected visit to China by Russian President Vladimir Putin this year.

Apart from political cooperation, Chinese investment is vital for the troubled Russian economy, under pressure from Western sanctions and expensive military activities in Syria.

“It is like a mutually beneficial deal,” he said.