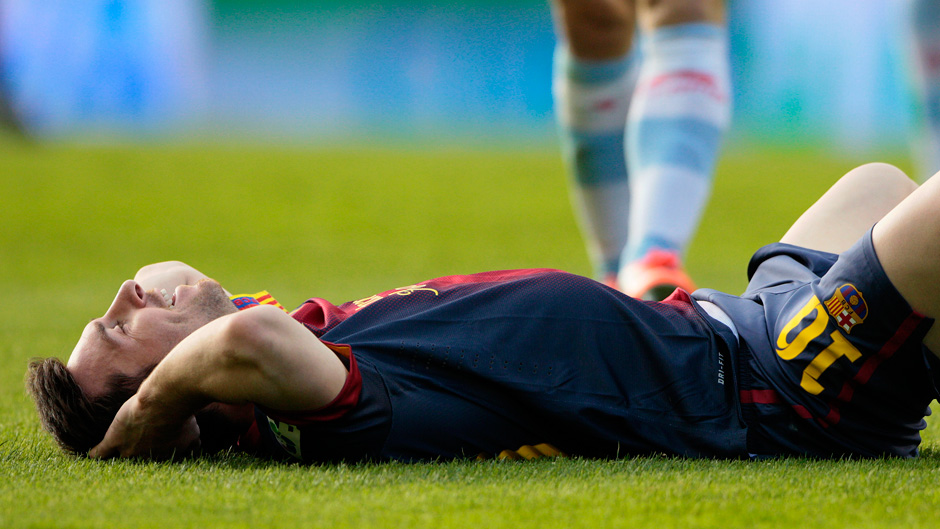 Lionel Messi notched up another goal-scoring record on Saturday but Barcelona’s cruise towards a 22nd title was halted when Borja Oubina hit a late equaliser which handed Celta Vigo a deserved 2-2 draw.

The visitors were without a number of first-team regulars and were punished for a slow start when Natxo Insa prodded home from close range to put Celta in front seven minutes before half-time.

The lead only lasted five minutes though as Messi released Cristian Tello to curl home a fine equaliser and the roles were reversed 18 minutes from time when Tello cut the ball back for Messi to drill low into the net.

The goal was Messi’s 43rd league goal of the campaign and also secured another record for the World Player of the Year.

By scoring for the 19th straight game, he became the first player to score against every other side in the Spanish league in consecutive matches.

However, Celta gave their chances of survival a huge boost as Oubina headed home Fabian Orellana’s cross at the back post two minutes from time.

And Barca assistant manager Jordi Roura admitted that his side lacked the concentration required to see the game out.

“I don’t want to point out individual errors,” he told a press conference.

“We had done the most difficult bit which was to score. In the final few minutes we lacked the collective intensity needed and they have equalised.”

Despite his disappointment at the outcome though, Roura did take time to laud another incredible individual achievement by Messi.

Roura will be concerned ahead though at how poor Barca’s makeshift defence looked ahead of their clash with Paris Saint-Germain on Tuesday.

Indeed in keeping with a scrappy opening quarter Gerard Pique nearly handed Celta the lead on 28 minutes as he miscued a routine clearance towards his own goal forcing Jose Manuel Pinto into a save before the keeper also turned Park Chu-Young’s follow-up effort behind for a corner.

Moments later Messi was denied what appeared a stonewall penalty as he turned Vadim Demidov inside the area, but referee Antonio Miguel Mateu Lahoz was unmoved.

Tello and Oubina then fired just off target as the game began to open up, but Barca’s slackness at the back was finally punished as Celta went in front on 37 minutes.

Marc Bartra unnecessarily gave the ball away and after Park had fed Oubina on the right side of the area, his weak effort towards goal was prodded home by Insa from close range.

The visitors were level two minutes before the break when Messi’s lovely ball over the top released Tello who curled in a precise finish off the far post.

The second-half followed a similar pattern to the first as Barca struggled early on and were only sparked into life when Andres Iniesta and David Villa were introduced with 25 minutes remaining.

Villa was only denied a certain goal with virtually his first touch by a great interception from Roberto Lago after another fine run and cross by Tello.

The Spanish Under-21 international was to prove key though as Barca took the lead as he received another ball over the top from Messi before pulling back a low cross for the Argentine to drive into the net.

However, Celta were rewarded for their fortitude with two minutes remaining of normal time when a fine cross from Orellana was met by a flying header from Oubina at the far post.