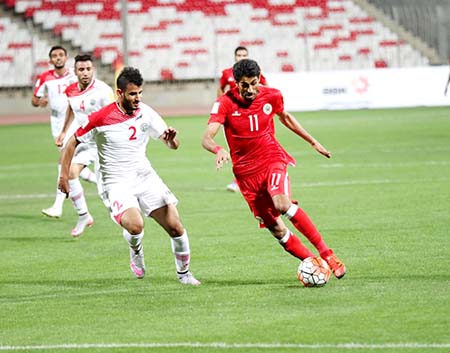 BAHRAIN recorded their third win in the group stages of the 2018 World Cup and 2019 Asia Cup qualifications after defeating Yemen 3-0 at the National Stadium in Riffa yesterday.

Group leaders Uzbekistan overcame third-placed Philippines 1-0 to extend their points tally to 18 in seven games as North Korea sit in second place with 16 points from the same number of games.

The top eight in each of the eight groups will qualify for the third round of the World Cup qualifiers and also gain direct entry to the 2019 Asia Cup along with the four best second-placed teams.

The remaining three teams in the eight groups will continue to battle for a place in the 2019 Asia cup.

Bahrain seemed weaker in the first half as they failed to create any real danger on their opponents’ goal.

Yemen, however, were much more creative with their chances but lacked in the finishing department as they could not make use of their chances.

The first sight of danger from Bahrain came in the 32nd minute as Abdullatif perfectly dribbled into Yemen’s penalty box, only to be brought down and awarded a penalty.

Abdullatif himself took the kick and placed it calmly into the centre of the goal as the keeper dived to the right to give Bahrain the lead.

Not only did the goal pump up the players but the Bahraini fans’ cheers also starting to be heard after they were silenced most of the time by the Yemeni supporters.

The second half saw Bahrain put in the same performance as Batista showed signs of frustration on the sidelines.

Al Rumaihi’s presences was clearly felt as his runs opened up spaces into the defence lines for Bahrain’s attackers to make attempts on target.

Bahrain soon managed to score the second goal of the night through Abdulwahab Al Malood, who unleashed an unstoppable left-footed shot into the top of the goal from outside the penalty box as the goalkeeper had no chance to save it.

Al Rumaihi extended Bahrain’s lead in the 90th minute as he put in a superb solo effort from the halfway line dribbling past the defenders to score another left-footed shot which tricked the keeper into the goal.

Bahrain will play their final game of the group stages on Tuesday against Uzbekistan.