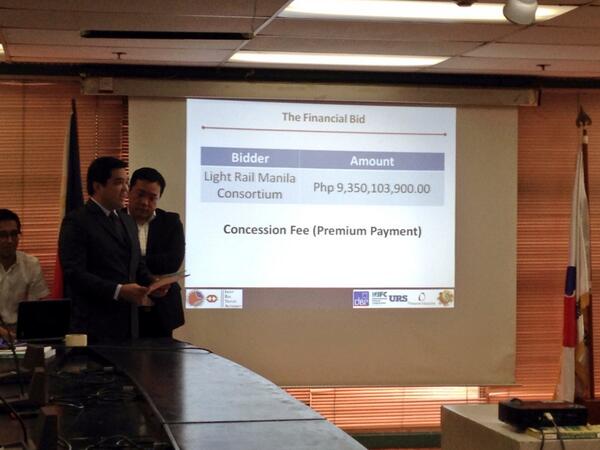 MANILA, Philippines – The Ayala-Metro Pacific consortium is offering to pay the government P9.35 billion for the right to build, operate and manage the Light Rail Transit (LRT) 1 Cavite extension project.

The Department of Transportation and Communications (DOTC) has already approved the consortium’s technical bid and opened the financial bid on Thursday.

Twenty percent of the P9.35 billion concession fee will be paid upfront upon the awarding of the contract. The rest will be amortized over the life of the contract for LRT Cavite.

Transportation Secretary Jun Abaya said the Light Rail Manila Consortium’s bid was above their expectations. The DOTC had offered a subsidy or viability gap funding (VGF) of P5 billion for the projcet.

“In fact we are willing to give a subsidy or VGF. So we were ready but it’s a good thing the proponent saw it in a different light. They see more potential than what the government sees,” Abaya said.

However, the DOTC still has to present the Light Rail Manila Consortium’s bid to the NEDA Board for approval at a meeting next Wednesday (June 11).

The contract needs approval from the NEDA Board, chaired by President Aquino, since there was only one bidder. Had there been at least two bidders, the contract would have been immediately awarded.

MPIC and Ayala officials expressed confidence the bid will be approved by the NEDA Board.

The auction for the P65 billion project had already been subjected to numerous delays and a failed bidding last year.

The LRT 1 Cavite project will extend the current LRT-1 line from its present end-station in Baclaran to parts of Parañaque, Las Piñas, and Cavite. – With report from Warren de Guzman, ANC