By John Hutchinson for MailOnline

If you like a really wild adventure from time to time, then these extreme animal encounter activities could be just the thing.

From a zipline over an alligator pit in Florida to massages with pythons in the Philippines, there are plenty of ways you can get up close and personal with the natural world's most fearsome predators.

Here MailOnline Travel takes a closer look at the attractions that will give you a holiday snap to remember.

The Cage of Death

The Cage of Death is the most famous attraction in Darwin, Australia. It gives daredevils the opportunity to get up close to ferocious crocodiles.

Visitors are put into a cylinder that is then lowered into a pool containing saltwater crocodiles. 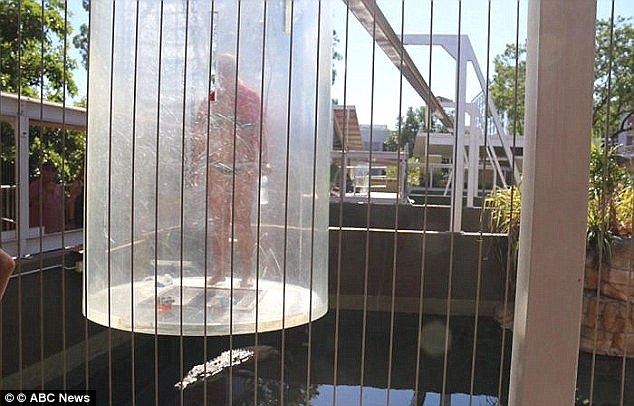 Visitors are put into a cylinder that is then lowered into a pool containing saltwater crocodiles at this tourist attraction in Darwin, Australia

The Cage of Death is found at Crocosaurus Cove. The website describes how the attraction has seen 'thousands of people thrilled and terrified by sharing the very environment of 5m crocodiles'.

'Regular feeding by our crocodile handlers when people are inside the cage encourages more movement from the crocodiles and ensures an up close and personal, face to face encounter that must be seen to be believed,' the website adds.

But all has not gone swimmingly in recent years.

In June last year a Dutch tourist had to be cut free from a cage suspended above a saltwater crocodile after the mechanism became stuck.

Cynthia Spaan had climbed into the Cage of Death and was supposed to come face to face with a crocodile named after Prince William. 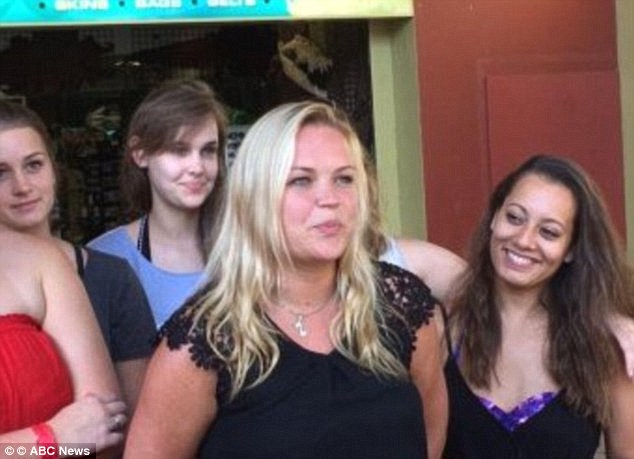 'In the beginning I thought it was really funny because I really wanted to do the cage dive so it was kind of okay,' Ms Spaan told ABC.

'But after five minutes I started freaking out a little bit, because I'm a little bit claustrophobic.'

After climbing into the cylinder with no problem and lowered over the water, the cage became stuck while suspended above the hungry reptile.

Ms Spaan was eventually rescued after staff took a drill to the cage and opened the top.

Lay down and stroke tigers in Thailand

At Tiger Temple, just outside Bangkok, tourists can really earn their stripes - by stroking a tiger.

The tiger sanctuary, ran by Buddhist monks, has been open near Kanchanaburi since 1994 and is home to around 150 of the big cats. 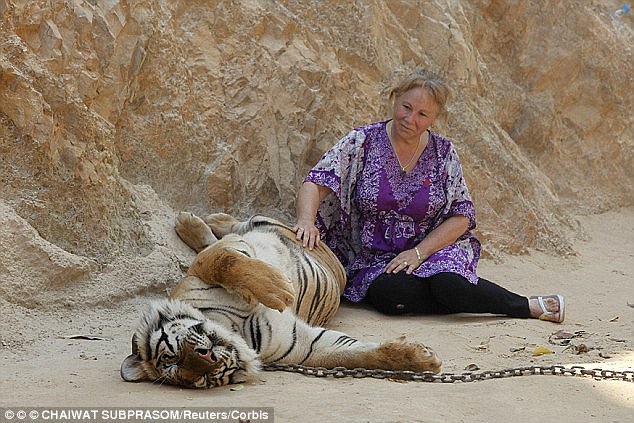 At Tiger Temple, just outside Bangkok, tourists can really earn their stripes - by stroking a tiger 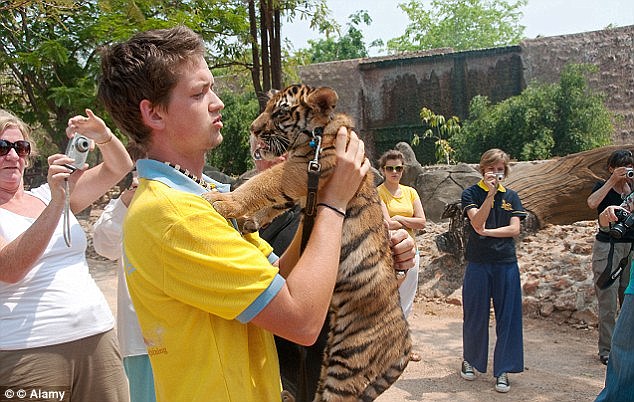 The tiger sanctuary, ran by Buddhist monks, has been open near Kanchanaburi since 1994 and is home to around 150 of the big cats

Tourists happily pet the tigers and pose for close-up photos with them, while their donations help pay for the tigers' maintenance and improvements to the temple.

But the monastery has also had a controversial reputation among animal rights groups and Thai wildlife officials who say it is breaking the law by keeping the cats.

Thailand's Department of National Parks, Wildlife and Plant Conservation (DNP) says the temple has been keeping the tigers without proper paperwork and has vowed to seize them, sparking standoffs in recent weeks between officials and angry monks blocking their way. 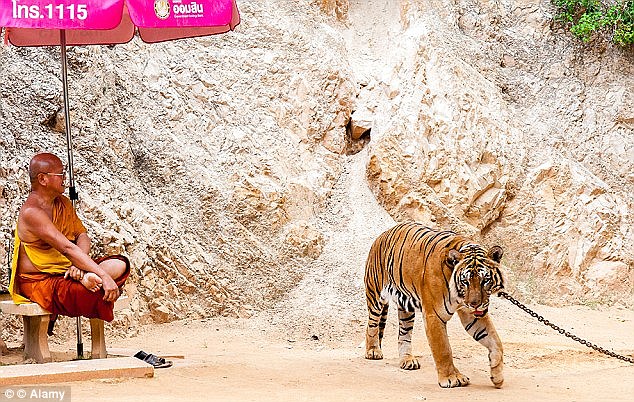 Zipline through an alligator pit

Intrepid thrillseekers looking to snap up the experience of a lifetime can zipline over a pit of alligators and crocodiles.

The attraction at St Augustine Alligator Farm Zoological Park in Florida gives visitors the chance to enjoy a bird's-eye view of every species of crocodilian including alligators, crocodiles, gharial and caiman. 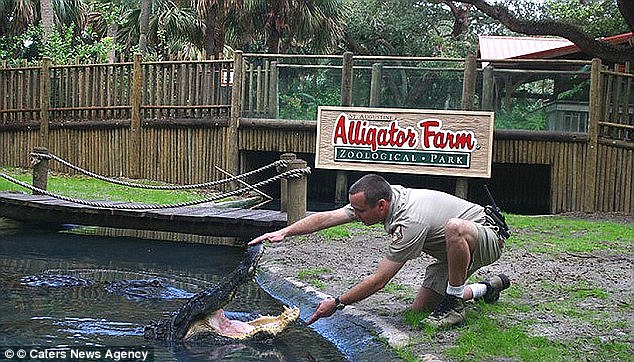 The unique challenge course has proved to be hugely popular for the last five years. The alligator pictured appears to be showing off its many teeth to a ranger

The unique challenge course has proved to be hugely popular for the past five years with around 200,000 people flocking to the zoo each year.

Park director John Brueggen revealed that the challenge course has become a highlight for visitors to the 123-year-old conservation park.

He said: 'Ours allows visitors to see a fantastic zoo from a bird's eye perspective.' 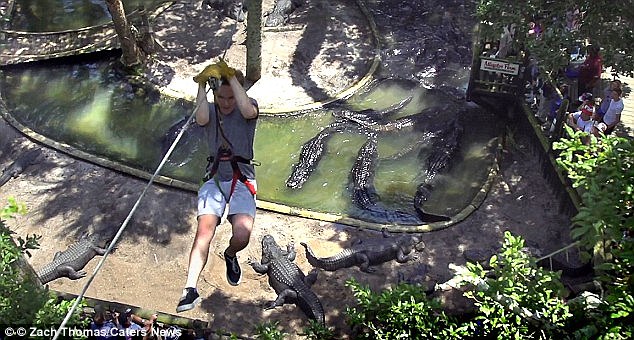 The attraction at St. Augustine Alligator Farm Zoological Park in Florida gives visitors the chance to zipline over pools of alligators

Those worrying that they may become the crocs' next meal need not worry, as each person on the zipline is clipped in with at least two safety lanyards.

The park, which opened in 1893 to exhibit the American alligator, aims to promote wildlife conservation and education boasting all 24 species of living crocodilian.

Other species visitors can see at the zoo include pythons, exotics birds and lemurs.

The zoo where HUMANS are caged

Tourists and predators have switched places at a zoo in China, where visitors are paying to be locked in a cage and stalked by big cats and bears.

Lehe Ledu Wildlife Zoo in Chongqing city is giving people the chance to get up close with some of the world's most ferocious animals - who they can even feed by hand. 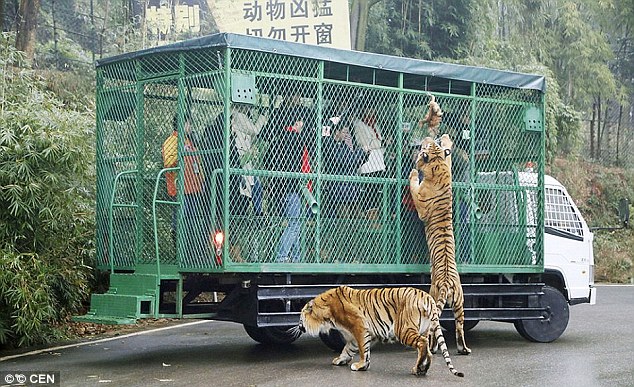 Standing inside a wire mesh cage, visitors at Lehe Ledu Wildlife Zoo are able to offer food to lions and tigers through a small opening at the top 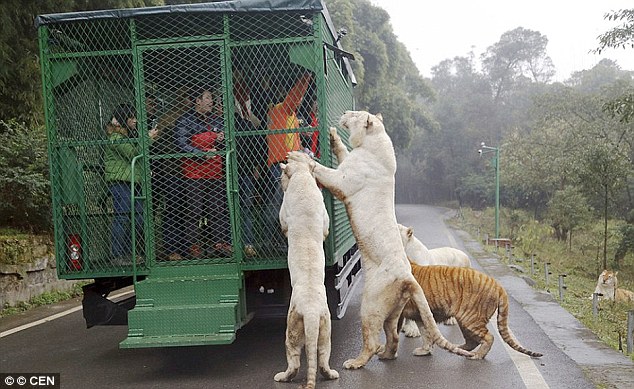 Chunks of fresh meat are tied to the outside of a vehicle, which drives through the enclosure, in a bid to attract the predators and give tourists the closest possible dining experience with them - without becoming dinner themselves.

The zoo is one of a few in the world which has installed a moving cage to bring spectators as close as possible to big cats and bears in an open habitat.

Standing inside a wire mesh cage, the visitors are able to offer food to lions and tigers through a small opening, and watch as the massive cats leap onto the vehicle to be fed.

Live chickens are also being used to bait the predators, which so far include lions, Bengal tigers and their subspecies, the white tiger, and bears. 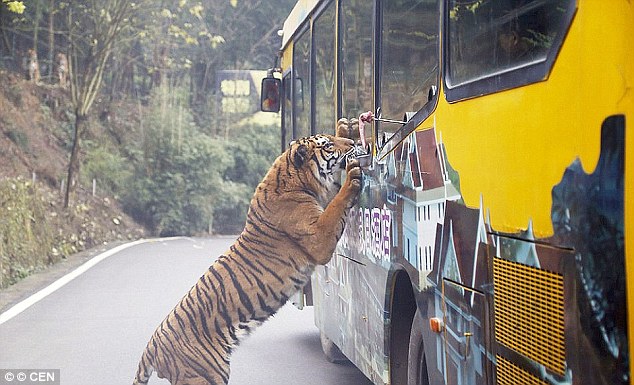 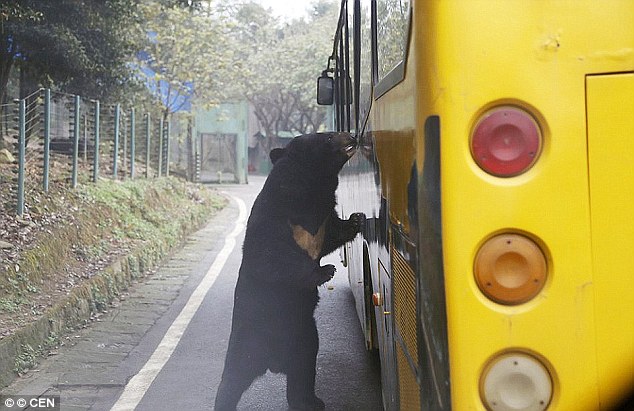 In the lair of wolves

As of last year, brave adventurers could choose to spend the night in a wolf's den in Norway.

Polar Park offers guests the chance to check into WolfLodge.

It's the world's first luxury accommodation situated inside a wolf enclosure. 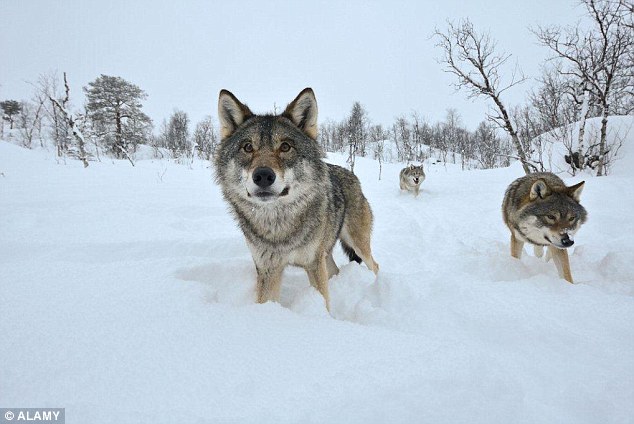 Visitors can catch glimpses of the creatures through the large glass windows, and there is even the option to interact with the wolves with a keeper present.

However the woman was then bitten on the face by the snake -and the incident was captured on video.

Ms Jin Jing was rushed to Phuket International Hospital and received treatment for minor cuts and bruising to her nose. Luckily, pythons are non-venomous.

She was released from hospital shortly after receiving stitches.

Nothing could be more relaxing than a deep muscle massage. But what if that massage was being dished out by four deadly giant Burmese pythons?

That's the unique experience that visitors to the Cebu City Zoo in the Philippines queue up for - and it is free for anyone who's brave enough to try it.

The Pythons - named Michelle, Walter, EJ and Daniel - are taken out of their cages and placed one at a time on top of visitors, who lie down on a bamboo bed near the zoo's main entrance. 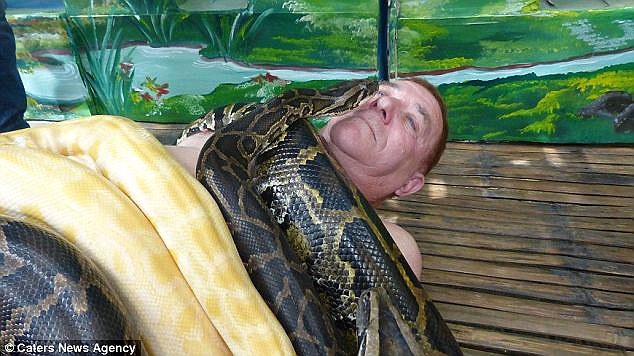 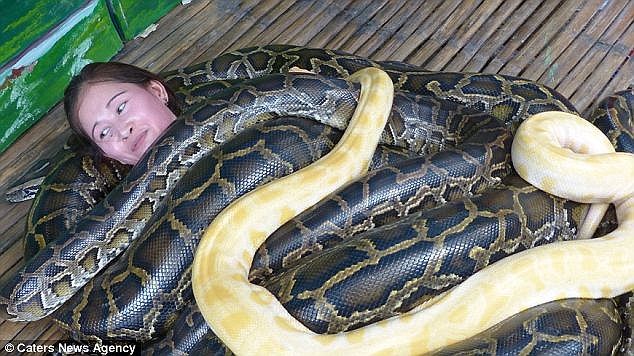 Under the watchful eye of zookeepers, the snakes slowly slither across their patient's body for up to 15 minutes 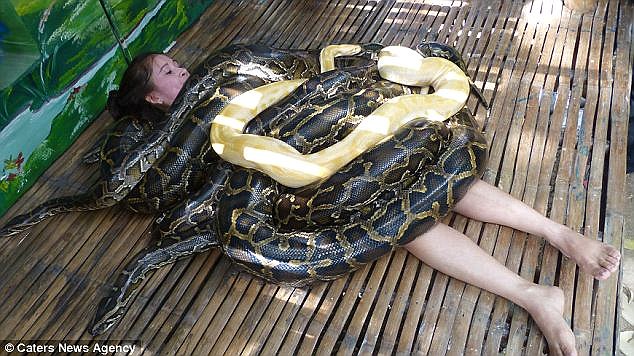 Under the watchful eye of zookeepers, the snakes slowly slither across their patient's body for up to 15 minutes.

But it's not for the faint of heart - Burmese pythons can quickly squeeze their victims to death. And with four of the 5m-long snakes weighing a combined 250kg, there is no escape once the 'treatment' starts.

One volunteer, Ian Maclean from Hawaii, said: 'I've been massaged twice and lived to tell the tale. 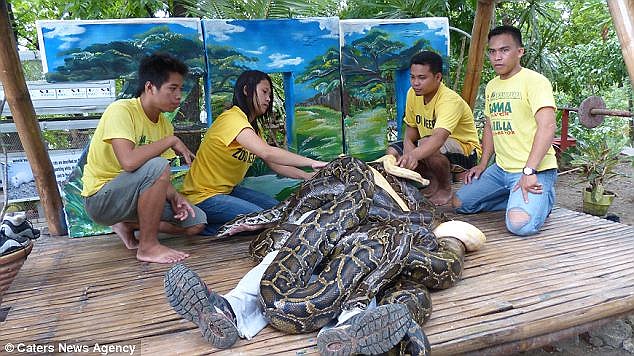 A little help, please? Four keepers keep a watchful eye as their snakes massage a punter

'I had to lie on my back on a bamboo daybed in the open air. I was briefed on what to do and what not to do during the massage.

'These instructions are crucial, as you can imagine. They tell you not to blow air on the snake, because this is like being pinched on the bum, apparently.

'You can't shout for help as the snake can feel your vibrations and thinks you're prey or a predator, depending on the environment.'

Great white sharks aren't known as animals that can be reasoned with - but that doesn't stop some brave souls being lowered into their territory in cages to spend some time with them.

The experience will certainly guarantee some fantastic holiday snaps.

Especially if the shark is a record breaker. 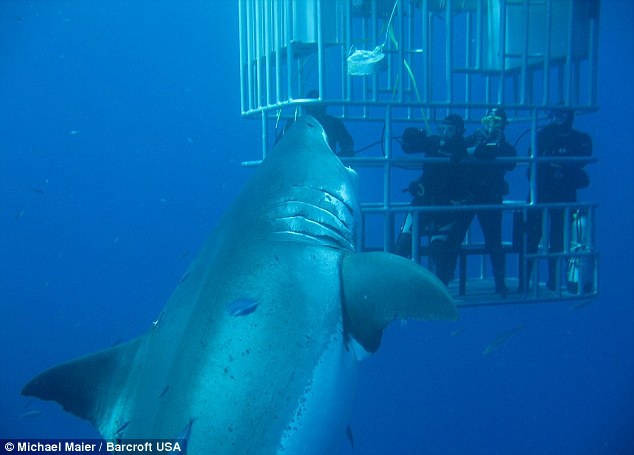 In February this year three divers took to the waters of the coast of Mexico in a cage and caught the moment they came face to face with the world's largest great white shark - Deep Blue.

The footage taken from inside the cage was released by Michael Maier, who described the moment they saw her emerge from the deep water below them.

Mr Maier, 48, said: 'Deep Blue is a very large female shark and she is known to be found in Mexico. When we entered the water we had to wait because there was nothing to see. 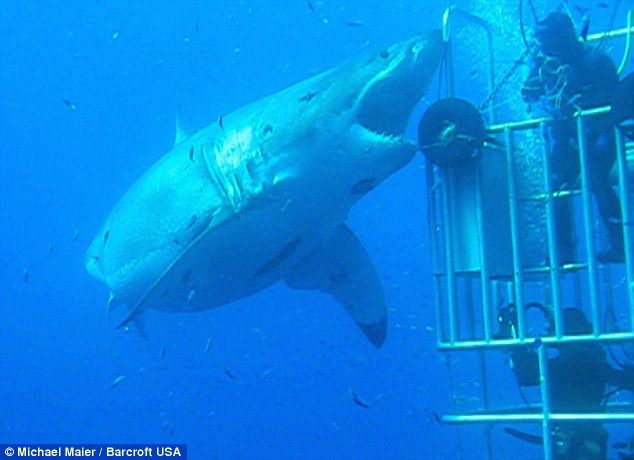 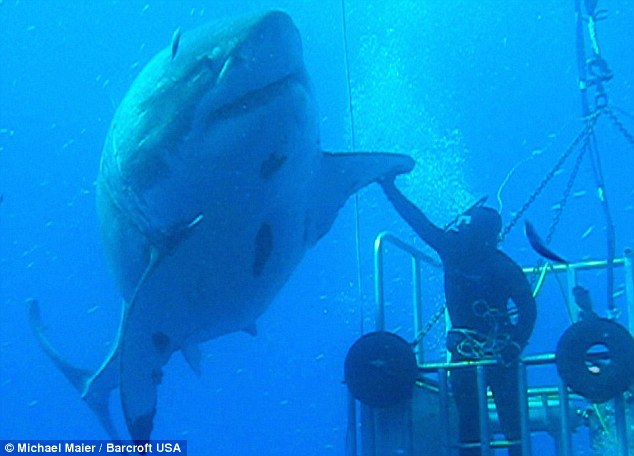 'All of a sudden out of the deep blue, there she came. We realised almost immediately that she was very big.

'She was very calm and not at all nervous and was circling us. She was very interested and was looking at us.

'During the circles we realised just how big she was - she must have been something like seven metres long. Everything was very well prepared. The whole team felt safe.

'We had a very long beautiful dive with her and we were all very much enthusiastic about the encounter.'

Footage shows Deep Blue swimming towards the divers inside their protective cage, taking an inquisitive bite at the metal before feasting on a piece of fish.

The shark then passes the second cage very closely - offering a fleeting glimpse of Deep Blue's huge teeth before she swims away again.

THE TOURISTS WHO SAW RIGHT INTO THE EYE OF THE TIGER

In January footage emerged of the moment a tiger paced inches from tourists on safari.

The alarming video was shot at the Umred Karhandla Wildlife Sanctuary near Nagpur in India.

The footage begins with the tiger walking stealth-like towards the vehicle, and while the driver and front-seat passenger sections appear to be covered, there are no roof or doors for those seated at the back. 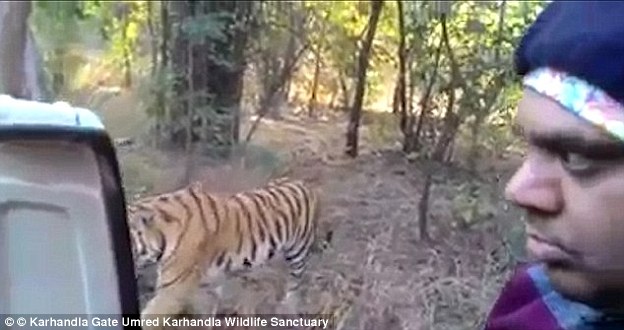 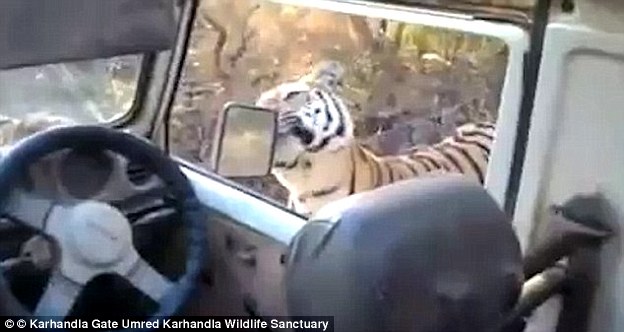 A man appears in shot, and while he remains calm as the big cat springs forward, his silence is perhaps only to be expected.

The driver appears to have moved out of his seat, thereby thwarting a quick exit.

The big cat lets out a couple of grunts before beginning an assault on the wing-mirror using its mouth and paws in an attempt to wrench it off. 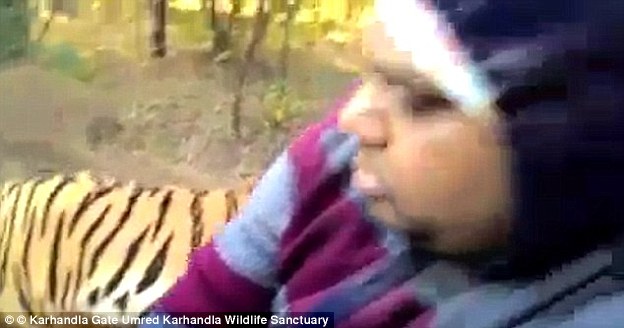 The big cat lets out a couple of grunts before beginning an assault on the wing-mirror using its mouth and paws in an attempt to wrench it off. The man pictured appears momentarily frozen with fear

After giving up on that attack, the tiger then paces past the truck, and this is where it becomes apparent that there is practically nothing separating the group of the people in the back from the ferocious beast.

As the tiger moves past, some of the people feel it is safe to whisper, but then quiet returns once more as the animal decides to return.

One man returns to face front, and appears scared to even look towards the predator.

As the tiger moves off again, the tourist group regain their confidence, with chatter resuming, and one person leans out with their smartphone to get a snap to treasure.